OnePlus 5 To Launch In India On June 22 | TechTree.com

OnePlus 5 To Launch In India On June 22

The smartphone will be globally launched on June 20th itself.

After being leaked for a couple of times by fans and industry, the Chinese smartphone maker is finally set to launch the much talked about OnePlus 5 flagship smartphone.

An official poster was leaker recently which hints at the launch date of the OnePlus 5, which is set for June 20 at 12 Noon EDT. However, this is expected to be a global launch date, as the company has recently confirmed that OnePlus 5 would be launching in India on June 22 in Mumbai at 2 PM IST, according to Gadgets360.

Also, according to the post, interested ones can watch the launch event online, steamed directly from the company’s website on June 20 itself. Since the time is 12 Noon EDT, we shall have to watch the event starting from 9.30 PM IST in India. 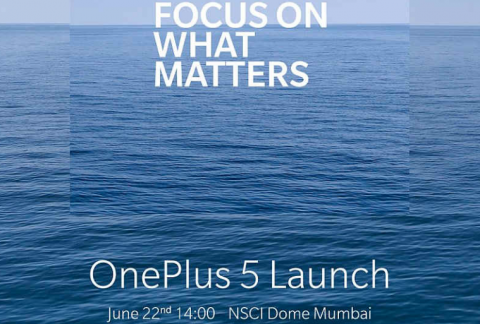 Along with this, the Gadgets360 post also mentions about pop-up events being organised by the company in New York on the same day, and in Paris, Amsterdam, Berlin, and Copenhagen on the next day.

As we mentioned earlier, the Indian launch is a separate event, and according to reports, fans can purchase tickets from the Indian website, starting from June 12. Well, it seems that the company has also mentioned about giveaways and gift hampers for the fans, while a few number of devices are expected to be available for purchase at the event itself.

Going by the previous leaks and speculations, we expect the OnePlus 5 to come with 5.5 inch display, 2.35 GHz octa-core Snapdragon 835 processor, 8 GB RAM, and either 64 or 128 GB ROM, and 23 MP rear camera along with 16 MP front facing camera. However, we still have no further information as to the dual rear camera setup. The device would be running on Android 7.1 Nougat out of the box.