HTC U 11 Spotted On AnTuTu

The smartphone is also being called as ’Squeezable Smartphone’ because of its ‘Edge Sense’ technology.

Just two days ago, we witnessed HTC U 11 smartphone being leaked in a listing on GeekBench revealing little information about its core. Now, it looks like we have the device spotted at AnTuTu as well, being tipped to be powered by Snapdragon 835 processor, under its hood.

HTC U 11 also being called as the ‘squeezable smartphone’ for its so-called ‘Edge Sense’ technology which allows users to perform various functions by justing tapping, swiping, and squeezing the phone, was first spotted on AnTuTu by PriceRaja. 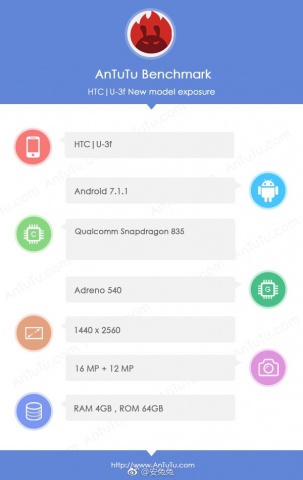 According to the AnTuTu listing and other previous leaks, the smartphone comes with either 4 GB or 6 GB of RAM and 64 GB or 128 GB of internal storage, along with 12 MP rear camera and 16 MP front facing camera.

The smartphone would be more likely featuring a QHD display of 5.5 inches with Corning Gorilla Glass 5 protection, while running on Android 7.1.1 Nougat operating system. It is also expected that, we may witness a 3,000 mAh battery with Quick Charge 3.0 support along with connectivity options like GPS, WiFi, 4G LTE, Bluetooth 5.0, NFC, and USB 3.0 Type C.

While the device is being rumoured and leaked out many times with launch date just ahead, it would be suggested to actually wait until May 16 to get to know what this smartphone is actually made up of.