The GFXBench listing was spotted by Roland Quandt and shared on his Twitter handle.

MWC 2017 event in Barcelona didn’t witness any flagship device by Alcatel, though we saw four devices being launched. However, it looks like a recent listing on GFXBench may be what we have been witnessing so far, the Idol 5, in the form of speculations.

According to the GFXBench listing, we can see that the smartphone comes with a Qualcomm Octa Core processor clocked at 2.0 GHz.

Also, on the technical edge, the device sports a 5.2 inch FHD display with 3 GB RAM and 32 GB ROM under the hood. We can also see that the smartphone may feature a 12 MP primary camera and an 8 MP front facing camera. 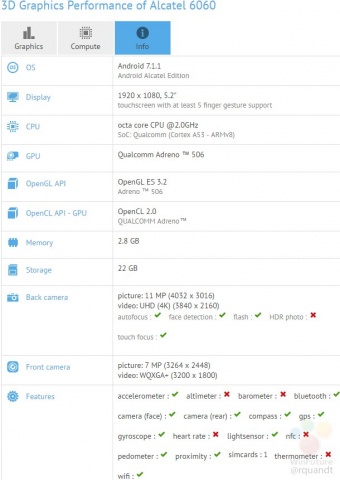 Having said this, the listing on GFXBench was first spotted by twitter user @rquandt (Roland Quandt). It is also worth noting that there is no mention about the smartphone’s model except that it is refered to as 'Alacatel 6060' in the GFXBench screenshot. However, @rquandt has claimed in his tweet as - ‘This should be the Alcatel Idol 5: 5.2in 1080p, SD625, 3/32GB, 12/8MP, Android 7.1.1, seen on GFXBench’.