The Google smartphone acts as the CPU, while the Xbox 360 motion controller provides spatial awareness for docking ability. 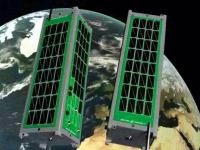 Microsoft's Kinect motion sensor has been co-opted well by the modding community and researchers alike, to come up with some amazing applications. This mod involving the X360 controller and the Google Nexus smartphone is literally space age. A British space firm by the name of Surrey Satellite Technology has integrated the motion controller into its microsatellites. Dubbed as the STRaND (Surrey Training Research and Nanosatellite Development), this shoe box-sized satellite employs cheap consumer electronics for building a cheap orbital solution.

The Google Nexus smartphone acts as the brains handling all computational aspects, whereas the Kinect sensor gives it spatial awareness. This allows the STRaND to know its position in space and dock with other satellites. This feat is challenging for even multi-million dollar satellites, but this cheaper satellite achieves this, thanks to consumer gadgets such as those mentioned above. The docking ability makes the satellite modular enough to launch and integrate with one another. This allows easy upgrades to satellite systems, and thereby saving the cost of launching a whole new one into orbit.

Although this satellite is cheap, it still costs hundreds and thousands of pounds. That's still less than millions required to make regular ones. Although no specific launch date has been decided, the satellite's first phase will launched by the end of this year.

Yes, you could say that I changed it and you could also call it a descent of sorts as well. Thanks for noticing though.
Submitted by Nachiket Mhatre on Thu, 31/05/2012 - 18:27
News Corner