Home » News » A New Android Beta Build Is Rolling Out?

A New Android Beta Build Is Rolling Out? | TechTree.com

A New Android Beta Build Is Rolling Out?

The second beta build of Android 7.1.2 may go public in April. You can signup for Android Beta program and enjoy for now.

Have you registered yourself for the Android Beta Program? Well, if not, then you probably are missing a big chunk of exclusive preview of what the upcoming versions of Android would be like.

Google has started rolling out the second beta build of Android 7.1.2 over-the-air to devices that are registered in the Android Beta Program. In-fact, to recall, the company had rolled out the first beta build for Android 7.1.2 in January itself. 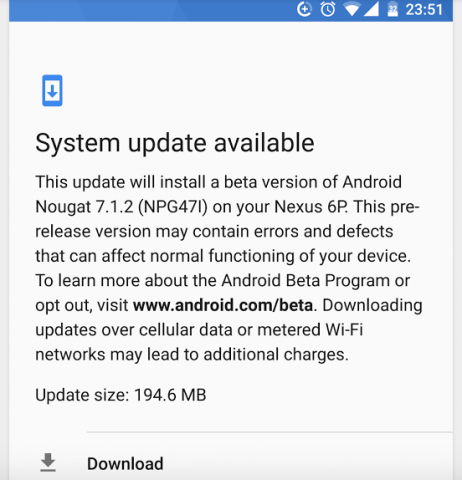 A Google Plus user by name Tatsuya Shiba has posted this screenshot of the rollout of Android 7.1.2 beta build 2 update. The update size seems to be 194.6 MB.

Having said this, Android 7.1.2 is currently supported by not many devices, and those that support are Google Pixel, Pixel XL, Pixel C, Huawei Nexus 6P, LG Nexus 5X, or Asus Nexus Player. Adding further, the build number for the new beta build is NPG47I.

However, the Android 7.1.2 has not still been made public by the technology giant, and it is in-fact expected that the new version of Android Nougat might be part of April’s security patch update.

It is worth to keep in mind that you would be getting the official update only if your device is eligible for the update. Else, you would probably take months together to actually get one, or probably you may not even get one, claiming that your device’s specifications are out-of-date!