Admits to a 2-3 week supply shortage for the "Pebble Blue" models in order to meet "highest internal quality standards". 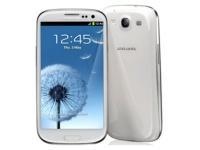 Everybody and their uncle wants to get their hands on the Samsung GALAXY S III. However, the "Pebble Blue" version of the Korean electronic giant's flagship Android smartphone had fallen prey to delays. In a statement to UK-based retailer MobileFun.co.uk, the smartphone maker has now officially confirmed that the particular blue version of the phone will face shortages for the "next 2-3 weeks". However, the white version will hit the markets on schedule.

The official stance is that the "newly invented blue colour" will be delayed to "meet the highest internal quality standards and to provide the best quality Galaxy SIII to customers". In reality, Samsung reportedly had to trash hundreds of thousands of blue body shells due to a manufacturing defect. That means, if you want a GALAXY S III sooner, you'll have to go for the Marble White version instead of he Pebble Blue one. Here's Samsung's statement in its entirety:

In order to meet the highest internal quality standards and to provide the best quality Galaxy SIII to customers, a short supply of Pebble Blue version is expected in some regions in the next 2-3 weeks.

Samsung is working hard to ensure that customers will get the Pebble Blue coloured devices as soon as possible."