The company has sent out a media invite stating that a fresh new Galaxy A Series will be unveiled at the event in Kuala Lumpur.

It looks like Samsung is sending out media invites for an event to be held on January 5. As you can see in this media invite attached in this story, Samsung has clearly mentioned about Galaxy A 2017 edition, and the venue is not visible, though it is shown that, it is held somewhere in Kuala Lumpur.

The company is, however, not giving complete details, and instead, we can see vague information in the invite. Samsung has put it bluntly that it is going to reveal an all-new Samsung Galaxy A Series (2017) smartphone. We still do not know whether it is going to be one smartphone or two, or how many for that matter. 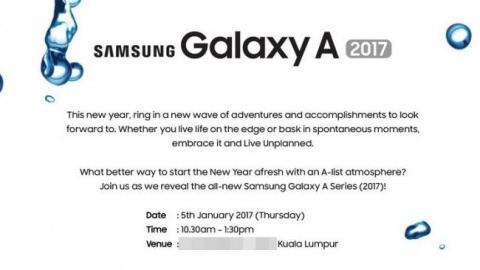 However, the upcoming A-series devices from Samsung are said to feature powerful hardware with water resistance, along with better front and back camera modules, according to a post published on GSMArena. In-fact, a lot of buzz has been spreading around recently, about the new A Series smartphones to be unveiled in 2017. We may have to wait and watch for the actual event to see what phone(s) will the company unveil.

Having said this, we can make a rough expectation considering the recent leaks and rumours we have witnessed, and expect the company to unveil Galaxy A7, Galaxy A5, Galaxy A3 smartphones. Keep in mind, all 2017 editions.