The Google’s keyboard app that supports GIF was until now available only on iOS devices.

Google has finally rolled out its Gboard keyboard app on its very own Android operating system. While until now, Google’s keyboard app was available only on iOS platform, it was not present on any Android devices, until a recent update, that was rolled out to Nexus and Pixel devices.

Gboard is a keyboard app by Google that supports GIF images and allows users to use GIF images directly from the keyboard. While it was not used much all these days, simply because it was not available on Android devices, people can now start using this to the fullest. 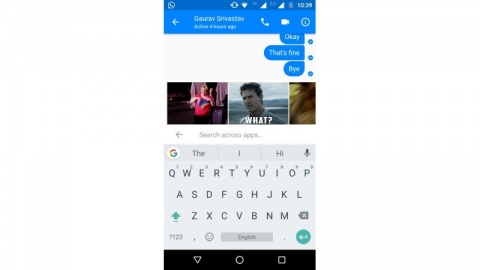 Interestingly, the Gboard keyboard app has entered Google Android OS as v6.0 update to Google Keyboard app. Also, Gboard adds the G button on the keyboard, allowing users to do a quick search directly from the keyboard itself.

Though the GIF button is always present on the Gbaord app, it may not be compatible with certain apps.

Speaking about the Gboard app, it comes with Glide typing, emoji search, optional dedicated number row, and many more that are pretty much interesting. Gboard also supports multiple languages, and users can keep up to three languages active on the keyboard for anytime use.

Having said this, the new Gboard update for Google Keyboard app will be rolled out to Android devices in couple of days, in a more gradual phase. However, as always, if you are impatient, you can download and install the app using the APK file available for download on APK Mirror.