Home » Mobiles » Specs For The HTC Bliss And Runnymede Revealed

Specs For The HTC Bliss And Runnymede Revealed

The Runnymede will be the company's flagship when it is launched while the Bliss is a female oriented handset. 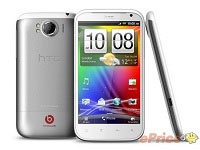 The HTC Runnymede, which is all set to be the company's new flagship, was revealed yesterday with some press images. The Runnymede is one of the few upcoming HTC handsets with Beats Audio for better sound performance. We now have the detailed specs of the handset along with info about the HTC Bliss. Looking at the specs, we can make out that the Bliss is a mid-range smart phone, while the Runnymede is a flagship.

The Bliss will feature a 3.7" S-LCD display as well as a 5 MP shooter on the back with a single LED flash, capable of recording 720p video, and a VGA camera on the front for video calls. Processor wise, the Bliss will feature a 1 GHz Snapdragon MSM8255 CPU along with the Adreno 205 GPU. The handset will come with 4 GB of internal memory, expandable via microSD cards (an 8 GB microSD card comes bundled with the handset). The Bliss, as you would expect, will be running on Android 2.3 Gingerbread on topped with the new HTC Sense 3.5 UI. Since the handset is targeted towards the lady folk, it will come with a bunch of goodies such as a pouch and a charm indicator.

The Runnymede is a relatively bigger handset, which could take some getting used to for the users. It seems like the companies aren't really satisfied with the relatively bigger 4.3" displays. The Runnymede is one of the slimmer handsets from HTC measuring at a mere 9.9 mm. The display is huge at 4.7" could go both ways for the users. The handset also features an 8 MP camera on the back with dual LED flash, capable of recording 720p video, along with a 1.3 MP front facing camera. Running on the same chipset as the Bliss, the Runnymede will have a single core processor clocked at 1.5 GHz. The handset will be sold in 16 and 32 GB variants, meaning that the price will be relatively higher. Android 2.3 Gingerbread and the latest iteration of Sense UI are also on board. The handset features the special Beats Audio speakers, which will considerably improve sound quality, and will come with Beats Audio headphones, which will stand out against regular headphones.

All in all, the Runnymede is a trendy looking handset with all the makings of being a quick seller. The price, however, will be the deciding factor in Runnymede's success. The source mentions that the 16 and 32 GB variants could cost GBP 530 (Rs 39,600) and GBP 560 (Rs 41,800) respectively. Looking at the price tag, we doubt if people would actually consider buying the handset. It should be interesting to see HTC's approach towards the handset given the high price tag. Both the Bliss and the Runnymede should be made available sometime before the end of this year.