The powerful all-in-one can switch between standalone desktop and collaborator mode.

Microsoft's Surface brand is known for interesting PC hardware. The Redmond based company has already changed the perception towards tablets and laptops with its Surface slate and Surface Book. This time around, the software giant is changing the way we look at the desktop computers.

At its Windows event in New York, Microsoft unveiled its first all-in-one desktop dubbed as Surface Studio. The sleek computer features the world's thinnest LCD touchscreen monitor. Thanks to its hinge, the Surface Studio can switch between a traditional desktop and group collaborator. It also works as a canvas for a digital artists. Input methods include touch, Surface Pen, and Surface Dial. 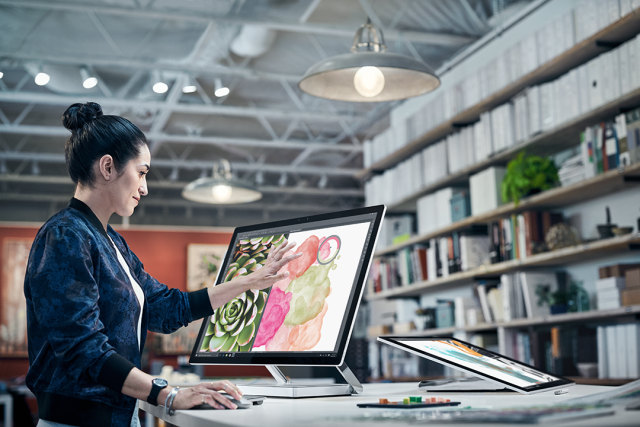 The Surface Studio boasts of a 28-inch display. At 192 PPI, the pixels deliver the life scale. For instance, 12-point font on the display is identical to 12-point font on a printed page. The PC features an integrated 5-megapixel camera with low-light capabilities. In the audio department, you get 2.1 channel speakers powered by Dolby Audio. There's also an infrared camera to power Windows Hello retina scan feature. The Surface Studio machines are powered by Intel's 6th generation Core processors. To handle graphics intensive tasks, it is backed by discrete NVIDIA GeForce GPU with up to 4 GB memory. The high-end model will pack-in GTX980M. The onboard storage is 2 TB. On the software side of things, you get Windows 10 Pro. The machine is compatible with Xbox One controller and VR headsets including HTC VIVE.