Home » Mobiles » Man Emulates Magneto For The Love Of His iPod

Man Emulates Magneto For The Love Of His iPod

Implants magnets into arm so gadgets will cling onto him - no strings attached! 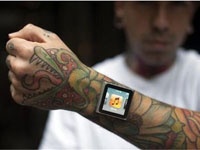 If Magneto from X-Men possesses the ability to attract metal, Dave Hurban can do the same, but just with his iPod nano. We must make it clear right now that Dave does not possess any superhuman powers, but he has acquired the ability to attract magnetic materials, thanks to four magnetic implants in his arm. He calls this implanting technique as iDermal, indicating that magnets are placed below the skin. He has posted videos in which he shows an iPod nano stuck to his wrist just like a watch, but without any strap.

This technique obviously involves a lot of pain and blood, so it is not for those with a weak heart, and we also think it is not for anyone in their right minds. When asked why he did it, Dave says, "I just thought it would be cool". When further asked about what he will do if Apple comes out with a new version of the device that is non-magnetic or larger, he says, "To be honest, if they come up with a new one, and it's bigger or smaller, I probably won't change it". We hope that this will not become a trend in the near future, but we never know what might strike the right chord with tech-savvy people. Check out the video to find out more about iDermal.

If you thought that was weird, you might want to check out the following video for a completely wire-free solution, and tell us what you think now.

Are you suggesting the implant from the first video or the second? :) In any case, we doubt anyone would want to go through the pain. That being said, let's see if we can actually manage to get hold of one to give away :)
Submitted by Jayesh Limaye on Tue, 25/09/2012 - 18:53