LG launches its flagship device just hours ahead of the iPhone announcement. 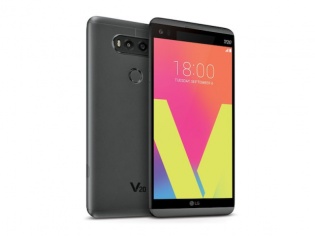 LG has announced its next flagship smartphone, the LG V20. With this handset, LG focuses back on the streamlined design and premium feel. That's a far cry from company's previous flagship the G5, which relied heavily on the gimmicky modular stuff. The LG V20 is the first device to ship with Android 7.0 Nougat.
Time and again, LG has enjoyed close ties with Google. The South Korean has been making Android devices since 2009 when it first launched the LG Eve also known as InTouch Max. More recently it collaborated with the search giant for Nexus 4 and Nexus 5 in 2012 and 2013. Last year, it launched the Nexus 5X with Android 6.0 onboard. Despite such good relations with Google, LG never success could never come anywhere close to its compatriot Samsung. At a first glance, the V20 looks a lot like the BlackBerry Z30. It features a button to release the backplate that provides access to 3200 mAh battery. This way LG gets to deliver a fancy design without trading off the convenience of a swappable battery.
Much like its predecessor, the LG V20 sports two displays. The primary one is a 5.7-incher with 2560x1440 pixels. LG makes top-notch LCD panels so expect wide viewing angles and rich colours from this Quad HD Quantum display. The 2.1-inch secondary display with pixel dimensions of 160x1040 sits above the main screen. It is much like Samsung's edge screen, which looks fancy but is hardly any useful. Shutterbugs have all the reasons to get excited as LG has come up with a dual-camera setup. The primary camera comprises of a 16-megapixel OIS (Optical Image Stabilisation) module coupled with an 8-megapixel depth sensor. This should provide some neat features to play with the depth of field in photos. For selfies, you have to settle for a 5-megapixel snapper. The handset is powered by Qualcomm's Snapdragon 820 chipset. Thanks to a 4 GB RAM, multitasking won't be an issue at all. The V20 comes with 64 GB internal storage and microSd card slot that supports up to 2 TB of additional space. Other features include a fingerprint sensor, 4G LTE, Wi-Fi, Bluetooth 4.2 LE, A-GPS, NFC, USB Type-C port, and 3200 mAh battery with Quick Charge 3.0. The handset is expected hit the home market by the end of this month. However, there's no word on its pricing yet.