Home » Mobiles » The Upcoming Samsung Galaxy J7 Prime Will Be Pegged At Rs 18,790

The Upcoming Samsung Galaxy J7 Prime Will Be Pegged At Rs 18,790 | TechTree.com

The Upcoming Samsung Galaxy J7 Prime Will Be Pegged At Rs 18,790

The upgraded J7 with more power and features will soon hit the Indian market. For India, the Galaxy J7 (2016) has been the top dog in Samsung's J series. However, it is soon going to face some stiff competition from inside the family. Launched in Vietnam (remember, Full Metal Jacket?) last week, the Galaxy J7 Prime is all set to hit the Indian market with more power and features. While the design hasn't changed much, the Prime variant feels relatively more premium thanks to its all-metal construction. Although there's no official word, the Samsung Galaxy J7 Prime is expected to be priced at Rs 18,790.
The upcoming handset costs Rs 3000 more than the Galaxy J7 Prime. So what does it have to offer? For starters, the Prime variant delivers a powerful Exynos 7870 chipset. The RAM has been doubled from 1.5 GB to 3 GB. Internal storage remains at 16 GB. However, the expansion slot is now compatible with 256 GB cards. The screen department is a mixed bag. While the new phone offers a Full HD screen, it lets go of the superior OLED panel in favour of IPS LCD. 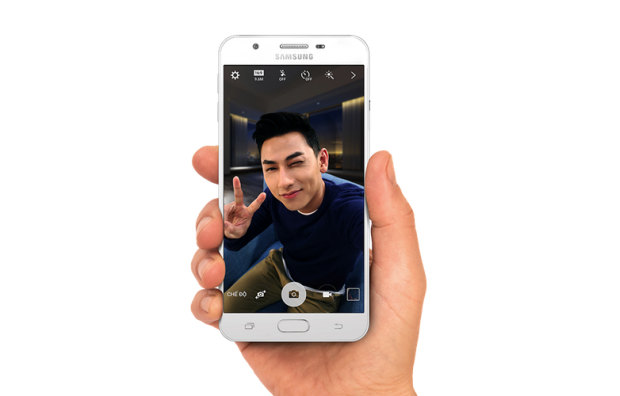 The 13-megapixel camera sensor is coupled with an LED flash. To appease the selfie lovers, there's an 8-megapixel front-facing snapper. The mid-range handset comes with a fingerprint sensor too. Other features include 4G LTE, Wi-Fi, A-GPS, Bluetooth 4.1, NFC, and 3300 mAh battery. On the software front, you get Samsung's TouchWiz UI in Android 6 Marshmallow flavour.