Many features of the newly introduced 'Stories' feature seem to very similar to the Snapchat app. 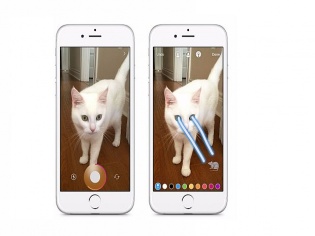 Let’s turn the clock back to 2013; this was a time when Snapchat introduced the 'Stories' feature, which would allow users to group together snaps into a cohesive series, which would eventually disappear within a period of 24 hours of upload. Switch back to August 2016, and the new 'Stories' section introduced in the Facebook owned Instagram app seem to be a little-modified version of the same features. Though Facebook is known to be a market differentiator, this time they seem like quiet the 'copycat' with their latest creation.

To get an idea of how Stories feature works on Instagram, one would perhaps notice a few circular photographs on top of their Instagram feeds, which are actually the recently updated feeds of the users. On tapping these pictures, one will be taken to the story of the user put together by a series of photographs and short videos, which is enhanced with stickers and some text as well. However, the advantage, or rather a copied feature of Snapchat, is that one cannot comment publicly about a picture or video, but can send a message directly.

Then comes the ' +' icon on the left side of the timeline. Clicking on it will take one to the story stream instead of the main feed, where one can further upload a video or photo which eventually disappears within 24 hours. All the other privacy settings as set in the Instagram profile will also apply here as well.

The list is perhaps longer, but then one comes to think of the legalities of such a situation. When and how does patent or Intellectual Property Rights (IPR) laws come into force? As told to Wired, Professor R Polk Wagner said, “The idea of featured ‘Stories’ is not new, so any patents would likely be quite specific to implementation details,” also adding, “And because the implementation/interfaces are slightly different, copyright doesn’t provide any protection. This is an area where IP laws don’t prevent the copying of another’s features or innovations.” In short, the legal problems for Instagram's 'Stories' is some distance away, as one needs to be 'substantially' similar in order to get into that troubled zone. When one examines both the apps closely, they look fundamentally different to a great majority, which prevents the legal troubles kicking in.

The world of tech enthusiasts will debate these issues in many ways; from the legal perspective, and the moral side of things. But then, is it seriously something which has been done for the first time? No! If one recalls, building on strikingly similar features and innovations has been a trend in the industry. For instance, Twitter who introduced stickers exactly like Snapchat. A week prior, Snapchat picked up the Instagram-like photo storage feature. Facebook has been after Snapchat too, considering the Slingshot App a while ago and had even tried aping Instagram with Facebook Camera in 2012, obviously before buying Instagram for USD1 billion.

The debate will obviously rage on as to what the implications may be and how smaller and larger players place themselves in the scenario, which mainly is centered around getting the next billion users to come on board their applications and sites, considering the Facebook audience benchmark. But to conclude, one just needs to soak in the bright side of it all; it benefits the end users, who end up getting multiple features which were otherwise spread across different platforms.