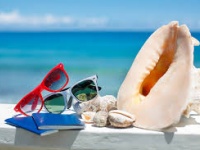 Vodafone has announced that it has developed a suite of Internet of Things (IoT) proof-of-concept connected ‘Smart Summer’ holiday essentials to help protect against UV, keep children safe on the beach and locate lost luggage.

The Vodafone ‘Smart Summer’ bikini and men’s swim shorts are equipped with UV sensors that track exposure to sunlight throughout the day. A smartphone app notifies the user when they have had too much exposure to UV light. The swimwear also contains a small vibrating alert built into the waistband and strap. The ‘Smart Summer’ child’s sun hat contains a UV sensor plus a low-powered Vodafone IoT SIM and tracking device which sends a warning message to the parent’s smartphone if the child wanders beyond a predetermined distance. The ‘Smart Summer’ suitcase includes an embedded Vodafone IoT tracking technology to enable the owner to geolocate missing luggage via their smartphone.

The ‘Smart Summer’ concept designs were developed as a pan-European survey commissioned by Vodafone from YouGov found that nearly half (48 per cent) of respondents forgot to apply sunscreen on holiday with three-quarters (76 per cent) saying they would be more likely to cover up if they had received an automated alert. 30 per cent of respondents also said that they or a travel companion had lost luggage while travelling.

Vacations are about having a good time with family and friends and every vacation ends with the loss of luggage, in some form or the other. Most of the time, complaints lodged for lost or stolen luggage are never taken into serious consideration, if technology can help to geolocate missing luggage, it would make vacations more relaxing and memorable. The Vodafone IoT SIM embedded in the child’s hat would help parents ensure their safety.