Drag And Drop To Create Apps Via Deluge By Zoho | TechTree.com

Drag And Drop To Create Apps Via Deluge By Zoho

The event also showcased the company's very own programming language, christened as 'Deluge', which is basically a drag-and-drop solution for all developers, allowing them to create custom applications on Zoho products via Zoho Developer and then publish it on the newly launched Zoho Marketplace.

According to Hyther Nizam, VP - Product Management, Zoho Corp, Deluge can save over 80 per cent of the developer's coding time (writing boilerplate codes), which he can later use to focus on the actual business logic. He also added that there are over 15,000 developers worldwide who are currently using Deluge.. and over 200 million codes have already been written for Zoho customers.

He also added that a sixteen year old boy was able to learn 'Deluge' within 2 weeks and develop apps on his own. Also, it seems that the company is in talks with colleges to offer Deluge as an elective programming language. 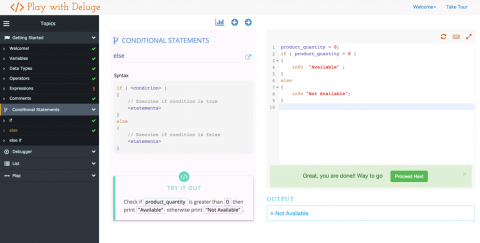 Rajendran Dandapani, Director of Engineering, Zoho added that, Zoho's very own programming language is capable of giving developers a scroll back option which they can use to go through their app's previous versions in real time, which is pretty much not possible with any other programming language.

With 'Deluge' in hand, companies can now create small apps which are required for some specific purposes like Employee Login and Food Rating, pretty easily, without actually contacting a full time app developer and spending months together writing the code. However, developers can only create custom applications on Zoho products as of now, but the company's plan is to make the programming language 'open-sourced' eventually.