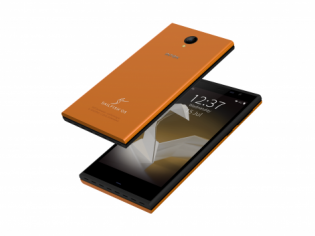 Intex Technologies has announced the launch of its first licensed Sailfish OS device in the world - Aqua Fish in partnership with Jolla. The smartphone with an easy-to-learn user interface was launched with all new Sailfish 2.0 OS and will be available on Ebay.com at INR 5,4990 The smartphone is also expected to go live on Flipkart, Amazon and Snapdeal in the coming weeks.

The Aqua Fish smartphone comes with a 5-inch HD IPS display, supported by a 2GB RAM, 16GB ROM and 32GB expandable memory. The smartphone weighs just 150 gms and sports a sleek look which gives the handset an elegant feel. Powered with Sailfish 2.O OS, the device has an android application compatibility and is operated by simple gestures designed for one hand use, providing a rich set of UI elements and creating a fascinating animated and touch-enabled user interface.

“At Intex, it’s our constant endeavor to bring latest technology to our consumers first. Keeping with that tradition, we are delighted to partner with Jolla to launch the world’s first smart phone with a licensed Sailfish OS. Sailfish is a young mobile OS; a challenger with a lot of promise. We are confident that our consumers will enjoy the Sailfish experience on the Aqua Fish,” stated Mr. Keshav Bansal, Director, Intex Technologies.

Speaking about the launch, Mr. Sami Pienimäki, Jolla Co-Founder, stated “We are very excited and proud to witness the launch of Aqua Fish, the first Sailfish OS powered smartphone licensed by a major device vendor. With Intex Aqua Fish, smartphone lovers in India will get the possibility to experience a totally new, fast and smooth user experience, and run their favorite Android apps in a totally new environment.”

The handset is powered with a big 2500 mAh battery which provides a talk-time of 6-7 hours along with a standby time of up to 20 days. Aqua Fish offers an 8MP rear and 2 MP front camera with LED Flash to capture vivid images effortlessly. The smartphone changes its interface according to the user’s mood and also supports several lightweight applications. It also features 1.3 GHz quad core processor.

Tailored for the Indian market and all music lovers, the Aqua Fish comes with a pre-loaded super app Gaana Music in collaboration with Times Internet, India's biggest music house.

The Aqua Fish also comes with pre-loaded apps such as Jolla Store, Mail, Calendar, Tutorial, Notes, Snapdeal and Android app store for an all-inclusive experience. Aqua Fish Smartphone with a Soft Touch finish and is available in an exciting fiery orange color.