iOS 5 To Release On October 12th 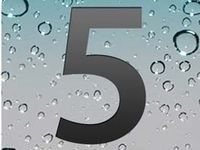 The much-awaited iOS 5 will be available on 12th October. Users will be informed about the free upgrade via a text message. A notifications feature is one of the 200 new additions in the upgrade, and will display alerts pertaining to SMSes, tweets, and Facebook updates among other things on your lock screen. Users can also view these notifications by sliding down the bar on the home screen, just like it's done in the Android OS. On receiving a new Tweet or FB update, the bar will drop down momentarily, without interfering with your full screen application.

Apple users no longer have to envy BlackBerry Messenger, as iOS 5 will include iMessage. This is the first instant messaging service supporting the iPad, iPhone, and iPod touch. This service will allow the transfer of text, photos, and videos, in addition to delivery reports and message read status. iMessage will work on 3G as well as Wi-Fi connectivity. Reminders is another feature to be added, and will let users keep a tab on their schedule, which will be delivered as pop-up notifications.

Twitter will be integrated into the OS, so one will not have to endure the trouble of downloading a separate app. Additionally, users will be able to directly tweet pictures and map locations to their Twitter account. The new OS will also enable users to quickly access their cameras by double-tapping the Home button. The camera will include auto-focus, a grid view for pictures, and pinch-to-zoom options. On the web front, browsing options on iPads will also be revamped. Users will now finally be able to create new tabs in Safari.

iOS 5 will be available for most iOS devices such as the iPhone 4, iPhone 3GS, iPad, iPad 2, and iPod touch (3rd and 4th generations).