Google is slated to roll out the update in the near future to all its users. PC World reported that Chrome will soon feature Cast Cast option in their menu options  for users on Chrome 51. Reports also suggest the possible addition of viewing the contents of a Chrome tab in a Google Hangout.

The new feature will ensure that users no longer need to have the Cast extension installed to send open tabs from the browser to a television although users can still continue to use the extension as a quick access option. 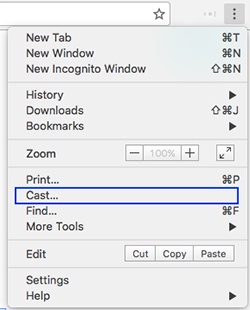 Sharing a tab in Hangouts works the same way with the built-in Cast feature. Google has a rundown of how to Cast to a Hangout on its help pages.

After the update is  complete users will no longer be able to manually adjust the resolution and bit-rate as the new built-in Cast feature will automatically adjust the settings.