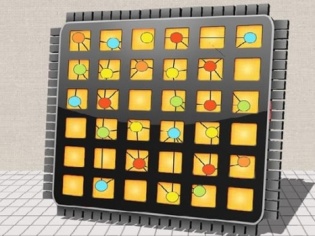 In order to handle multi-tasking, computer processors have traditionally been increasing the number of cores. Though such a design makes them more power-efficient in operations, it also leaves a tricky situation for programmers. When it comes to writing the software code for multi-core processor devices, programmers typically need to juggle between multiple functions to be executed, including prioritization of tasks. With Swarm Chip's unique circuitry, equipped with many more cores working together, writing code becomes far lesser as multiple tasks get executed seamlessly, including scheduling. As per some test results, there has been 75-times the general speed on the Swarm chip.

Creating software for multiple-core processors is akin to managing a complex project, which needs selective allocation of tasks to the right people, and also running simultaneous large instructions, which needs scheduling. Swarm Chip's new circuit architecture makes it possible, with the entire process being automated, where large tasks are involved with an even larger set of instructions. Prof Daniel Sanchez explains, “Swarm has two advantages over conventional multicores. First, Swarm supports tiny tasks, as small as tens of instructions, efficiently. By contrast, current multicores need larger tasks (thousands of instructions or more) to operate efficiently. Supporting smaller tasks allows more parallelism, simply because there often is a lot of parallelism inside each large task.” He adds, "Second, Swarm enforces a global order among these tasks. By contrast, current multicores cannot support ordered execution efficiently, especially with small tasks."

The Swarm chip boasts of a 64-core design, so when data conflict situations arise, automatic prioritization takes place, which means bigger and smaller tasks can simultaneously run, without having to be individually programmed to do so. In simpler terms, Swarm chip could go several times up on current processors, and bring a greater than server or supercomputer power, within smaller machines.