This TV Remote Can Turn Even Dogs Into Couch Potatoes

Ever wondered what your pet dog does in your absence? This TV remote now lets them watch their favorite program 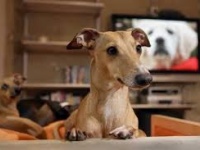 “Woof, woof! I had a ruff day, change the channel human!” Dear dog lovers and pet owners if your dog loves watching the TV then here’s a good news , a prototype of the first ever dog TV remote with extra-large buttons for clumsy paws has been created by experts, allowing dogs to control the TV when their owner leaves the room.

Pet food brand, Wagg, has been working with Ilyena Hirskyj-Douglas, PhD Researcher in Animal Computer Interaction Design at the University of Central Lancashire, to develop the prototype which will allow canines to control the TV for the first time.

The remote marks the next step in the growing trend of animal computer interaction (ACI), which has seen many pet-focused apps and interactive toys launch over the past few years.

The prototype is used in a similar way to a normal TV remote and has been specially designed for dogs with hard-wearing waterproof plastic. It includes paw-friendly buttons with raised surfaces to avoid paw slippage, in  yellow and blue colours. Although dogs generally have a 240 degree vision, they have fewer colour sensitive cones than humans, which results in them being red-green colourblind preferred colours for dogs. Other features also include squeak sounds that produce a lower-intense frequency and appeal to dogs, as well as a hole to attach a rope toy for the dog to interact with and carry the remote. The model remote is currently being trialled, with experts monitoring dog's reactions to the buttons, sounds and colours. Following the analysis stage, Wagg will approach tech companies with a view of putting the model into production.

Reeves added: "Recent research carried out by Wagg, looked at the extent to which television plays a part in the lives of our dogs - with a staggering 91 percent of owners admitting their pet regularly sits on the sofa and watches TV with them.

The prototype design has been commissioned by Wagg to mark the launch of Dogglebox, a one-off spoof specially created for YouTube with a completely canine cast. The video sees pooches of all shapes and sizes parody the Channel 4 laugh out loud TV show, Gogglebox.

Does man’s best friend really needs all of this, or do we humans assume that they need this more than us and our pammering?