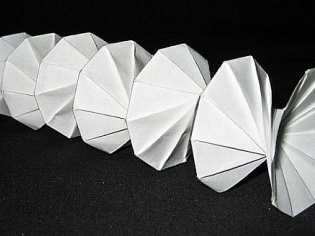 Ever since something like 3D printing came into existence, creating and molding surfaces became a computer controlled automated activity and bought about many solutions to problems. But before all of this technology took over, the ancient Japanese art of Origami was behind creating wonderful aesthetic shapes and forms from flat surfaces. These days however,  it is also behind creating some of modern engineering's most innovative products such as origami pills as a replacement for invasive surgery, or folding solar panels on airplanes which can be furled and unfurled as per need. The theme of it all lies in the idea of transforming a flat surface into something totally different.

Origami traces its origins to the 6th century BC, when Buddhist monks carried paper from China to Japan and found its use in multiple rituals, especially the purification rituals which they partook in. Paper took a more recreational turn when mass production happened around the 17th century, and a number of uses increased manifold. However, form stagnancy in Origami stayed as a reality till the 1950s, until Japanese artist Akira Yoshizawa came into the picture. He created multiple figurines of animals and bought about new creations into being. Eventually came physicist Robert Lang, who bought about computing origami, where mathematical equations and the art of folding and transforming came together.

Origami is obviously more innovative now. Last year, a team of researchers at the Karolinska Institute of Sweden showed how a particular fold in manufactured DNA could result in better drug delivery mechanisms being created, especially if there was a particular fold resembling that of the shape of a rabbit. What is innovation showed was that since DNA strand itself is flexible, the cells got better spread out over the surface edges and the mathematical origins came from a concept called Eulerian circuits. According to their lead researcher Bjorn Hogberg, “We can now create structures that can be folded in, and remain viable in, physiological salt concentrations that are more suitable for biological applications of DNA nanostructures,” which explains a new mechanism developed for treatment of cancer tumors.

Then comes the innovation at MIT, who have developed an innovative origami pill, as an alternative to invasive surgery. It would involve the swallowing of an origami pill which would expand in the stomach, help in the treatment process before being ushered out of the system with the help of batteries. The experiment has so far been conducted on pig stomach and humans are yet to be tested. Their next innovation is the self-assembling robot, the smallest of its kind in the world, measured at 1.7cm in size. They are made of magnets and PVC sandwiched between layers of laser cut paper. When coming in contact with the heating element, the PVC contracts in form, making the pre-formed cuts help power the mini robot to move about as needed.

The next innovation comes in the realm of space sciences. Because of origami figures being able to expand after being folded, NASA scientists are working on making flexible and folded solar panels, which would measure 8.9 feet across when folded. When deployed into space, they could spread over a surface area of 82 feet, and use the flat surface to capture and beam down energy from outer space. Then comes NASA's Bigelow Expandable Activity Model (BEAM), which will be used to create a giant inflatable airbag in space. When deployed by inflating and used in space, it would cover the surface area of a space station, and be then be used to create an artificial habitat or station in space.

With origami being rediscovered in recent times, robotics, medicines, architecture, and obviously design are some of the areas that are being looked at for future advancement. May be the folding tablet mini robots could be the medical discovery that could solve medical problem long plaguing mankind.