While the device is not yet officially announced, OppoMart.com has it listed already, with detailed specifciations; little we know how true those details are! 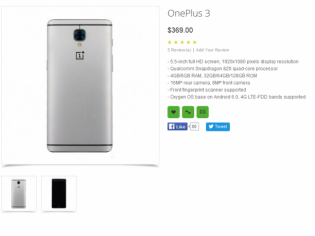 While most of the OnePlus fans are waiting with full excitement for the new upcoming device, it looks like, they have a new update.

OppoMart.com has recently listed OnePlus 3 for a price tag of $369 which is approximately INR 24,000, with an 'out-of-stock' status.

According to the listing, it seems like OnePlus 3 is expected to be available in 6 variants as given below:

This information is not yet officially revealed by OnePlus. Also, the company has not revealed anything about the price yet.

However, other technical details as given in the OppoMart listing speculate that the OnePlus 3 might come with a 5.5 inch fll HD screen, Qualcomm Snapdragon 820 quad core processor, 16 MP rear camera, 8 MP front camera, finger print scanner, and 4G LTE compatibility.

The device runs on Oxygen OS based on Android 6.0, according to the listing.