Facebook CEO Mark Zuckerberg had a live chat with three astronauts aboard the International Space Station. 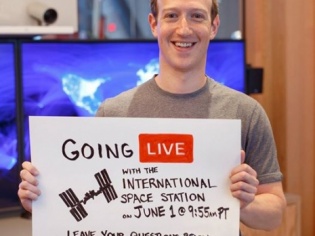 Facebook founder Mark Zuckerberg had in an official post announced, “We're doing the first ever Facebook Live from space tomorrow! I'll be going live from Facebook HQ with astronauts on the International Space Station tomorrow, June 1st, at 9:55am PT.”

Mark Zuckerberg has also posted the video chat on his official page which has garnered over 4 million views. Mark’s conversation with NASA astronauts Jeff Williams and Tim Kopra, and British astronaut Tim Peake,  a live video streaming has caught the attention of netizens across the globe.

The astronauts have been abroad for about 169 days and they indulged in a breezy yet  interesting conversation with Mark about their life and research in space.  Mark had asked the trio questions sent in by his followers and discussed about the communication technology to help connect with astronauts.

When quizzed about their favourite pass time  Jeff Williams said, "All the different seasons and stuff that goes by, the different lighting conditions and weather patterns, and all the geography and geology and the ocean currents, and thunderstorms, seeing lightning ripple across a weather system  that's a lot of fun," he said. "So we spend a lot of time in the window," he added. 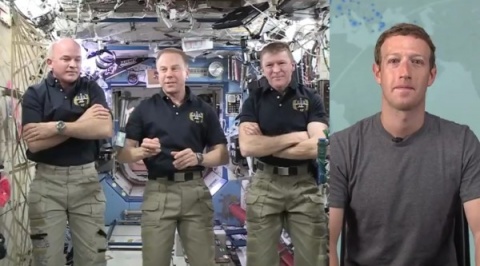 The men in space also revealed how the food tastes different in space and how they love to play around with food. They also debunked the misconception of astronaut ice creams! Kopra exclaimed  "We know that the astronaut ice cream that you buy in the gift store, that powdery stuff - yeah, that's not real" .

When a follower on Facebook questioned Mark about the viability and benefit to people, he replied, “ It's just awesome. And once we can give people in space the power to share what they're doing, then we know everyone else will have that power soon too.”

Watch the video chat between Mark Zuckerberg and the astronauts aboard The International Space Station.