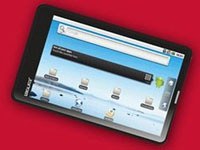 Datawind, maker of the world's cheapest tablet, has decided to enter the low-end tablets segment in India, and this is not the same as its Aakash venture with the government. The company has come out with two tablets, one with a capacitive touch screen, while the other will feature a resistive one. These two new Ubislate tablets, however, will feature configurations similar to that of Aakash II, which is scheduled to launch sometime next month. The devices will sport 800 MHz Cortex A8 processors, running Android 2.3, and will also feature one standard USB port.

Off the two, the Ubislate7c will come with a capacitive touchscreen and internal memory of 4 GB. The Ubislate7+ will sport a resistive screen and 2 GB of storage space. The former is priced at Rs 4000, while the latter costs Rs 3000.

Apart from this, the company has also collaborated with Aircel to provide an unlimited internet plan at Rs 98 per month on 2G/GPRS connection for both these gadgets.

Suneet Singh Tuli, CEO of Datawind said, "We have tied up with distributors across India. The tablets will be available by May-end only after we have fulfilled the existing orders. Our customers who made pre-payments for earlier version of the tablet will get the upgraded version".

Does this seem reassuring enough for you to place an order for Datawind's tablet?

i think aakash is a failure from the govt of india, there so many technical problems in that, micromax funbook is a better choice than that... check the reviewsa at http://geekfanatics.com/micromax-funbook-tablet-at-just-rs-6499/
Submitted by rohit on Sun, 29/04/2012 - 23:35
News Corner