Last year the company rolled out OPPO R7 Plus, the first fan device to come out of OPPO’s partnership with FC Barcelona. 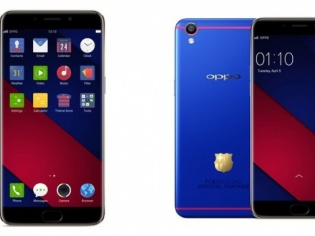 Oppo continues its association with FC Barcelona and as a part of the three-year sponsorship deal, the smartphone makers are all set to release the F1 Plus FC Barcelona Edition which comes in blue-and-red color scheme, an 18K gold-plated club insignia and an FCB-themed user interface.

The F1 Plus FC Barcelona Edition will also feature a blue protective case, laser-printed with the signatures of iconic players such as Lionel Messi, Neymar, Luis Suárez, Ivan Rakitic and Andres Iniesta. This feature is bound to attract extreme loyalists of the club. The limited edition phones are expected to be launched by the end of June.

“The F1 Plus is all about snappiness, style and speed, so there’s no better partner for it than the phenomenal FC Barcelona,” said Sky Li, OPPO Vice President and Managing Director of International Mobile Business.

The Oppo F1 Plus FC Barcelona edition has an all-black front and on the rear it features a deep Barca blue crossed by two red stripes. The smartphone features a 16MP and 13MP camera setup and is backed by a 2,850mAh battery. It runs Android 5.1 Lollipop.

Oppo F1 Plus FC Barcelona Edition is expected to arrive in China, Singapore and Indonesia, as well as other select markets, in mid-June. The company has not yet disclosed the price of the smartphone.