The most powerful smartphone in the Optimus family. 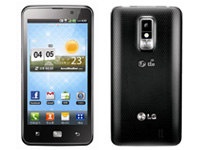 LG has launched a high-end smartphone, the Optimus LTE. As its name suggest, the phone supports LTE connectivity (3.9G) and rivals Samsung's recently revealed Galaxy S II LTE. The phone boasts a 4.5" IPS True HD display, which according to the company, will be the first panel with pixel dimensions of 1280x720 to go on sale in South Korea.

The Optimus LTE will ship in South Korea from 5th October through SK Telecom. However, there's no word on the international availability at this stage.