Tiny Eye : A VR App For Everyone

Tiny Eye app allows users to experience virtual reality with or without a headset. 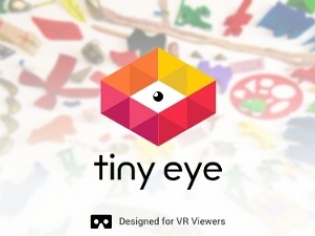 San Francisco-based app maker Yeti has unveiled Tiny Eye, a retro-inspired, smartphone virtual reality game which is now available on iOS and Android. The 360-degree VR app is inspired by the classic childhood game, I-Spy, and was conceived as a way to make virtual reality accessible to anyone, with or without a headset.

"Our goal was to create something that was casual and accessible yet fun and engaging," said Yeti President and Founding Partner, Tony Scherba. "Virtual reality is usually about intense immersive experiences, so we built Tiny Eye to be a bite-sized and enjoyable game that anyone can pick up, play and come back to again and again. We want it to be what Angry Birds was for mobile or Farmville was for Facebook games."

Players of any age enter a tiny world of figures and scenes to find lost treasures and toys hidden all around the immersive space in three miniature, handmade "packs":The three packs available to all users are “Battle Pack”  that takes users back in time to see pirates, dinosaurs, and knights duke it out, “Wheels and Wings Pack” is a modern concept of automobiles and planes, while “Wonders Pack” allows users to explore people,culture and monuments from across the globe.

The users can download the app from Google Play Store or App Store and decide whether to experience it with or without a headset. Players choosing to play without a headset need to simply move their phone to find the hidden objects and touch the screen to highlight the object and eliminate it from the list. If a player chooses to use a headset, they can use one of their own or purchase a DODO case headset in the app. The hidden objects will change over time to allow players to come back to their favorite levels and xperience Tiny Eye anew all over again.

"We built Tiny Eye as a throwback to one of our favorite games as a kid, and we hope it'll be something that introduces more people to the magic of virtual reality," added Scherba.