The new technology might be able to project on your sleeve, palm or desk. 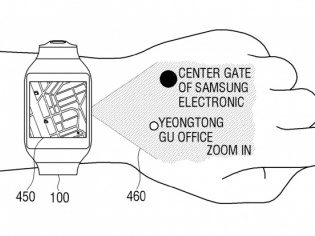 Ever since smart watch became part of consumer tech jargon, the big guns in the field have been attempting to build that one feature that would provide the ‘oomph value’ to a piece of technology that has consistently failed to gather steam amongst both the geeks as well as early adapters.

There were talks of several features such as gestures, voice commands, internet-of-things and pressure sensitivity as possible additions to the tiny screen worn on wrists. Now, Samsung seems to have unearthed, what it believes, is the ‘mother of all utilities’ in its smart watch (spelt here as two words because MS Word still does not recognize it as a single entity!)

The Korean giant has reportedly applied for a patent on the concept that would project the surface of a watch (or for that matter any wearable device) on to anything – the user’s hand to her desk to the wall behind her boss’s head.

The technology would use sensors to detect the interactions beyond the wrist, even detecting the geometry of one’s hand, in order to adapt the interface to that area. Of course, you could end up seeing a few additional apps or buttons in case you open and shut your palm!

Details of the patent application provided on the United States government website (Read it here) suggests that the technology would use the contours of the hand or palm to create a virtual display with fingers being utilized as a gesture-based control system.

It also explains how the new wearable could extend its display on to a wall or any other flat surface that is placed near the user. Additionally, the technology can also be used on other wearable technology products in the virtual reality (VR) and augmented reality (AR) space, especially headsets.

Of course, this development does not necessarily mean that existing users of smart watches begin selling them for discounts. Like all other patent applications, this too is based on an idea that currently exists on paper, with no certainty that Samsung will follow through and develop this into a product.