Reddit user edits gameplay and cinematic footage from Uncharted 1, 2, and 3 into a continuous film. 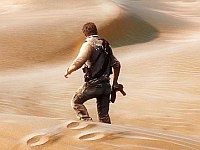 It's no secret that the Uncharted franchise is the closest to a cinematic experience you can get with any game. However, not everyone owns a PS3, or is comfortable with gaming in general. The fact that so much of the population was being denied the awesome writing, script, and voice acting found in the Uncharted games, bothered one Reddit user by the name of morphinapg so much that he did something about it. What he did was, recorded play-throughs of all the Uncharted games and edited them to make it all look less like a game, and more like a movie.

"If you are ever in the mood to watch the story of one of these games in one sitting, but don't have the time to play the entire game through, then these are great for that purpose, or if you want to show these games' stories to friends or family that don't care about playing video games", says morphinapg, explaining the relevance of these videos.

If you don't have a PS3, are too broke to buy these games, or just plain interested in experiencing them as a movie, check out the videos below. Also included are various means to download the videos, because it's just a matter of time before they will get pulled down for copyright infringement.