The wireless speaker retains the same 5 speaker drivers, but is now 20 per cent smaller and 10 per cent lighter. 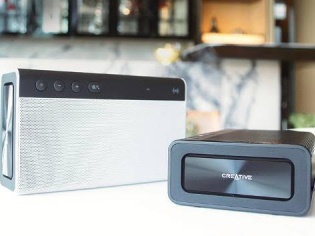 Encased in a stylish sleek housing that exudes the understated sophistication of a well-designed audio instrument, the smaller-lighter-sexier Sound Blaster Roar 2 continues to impress, whether it is used at the office, in a designer home, or at a party.

“The original Classic Sound Blaster Roar was an amazing feat of audio engineering.  It was truly a speaker that defied the laws of acoustic engineering.  We razed through countless designs and overcame seemingly impossible design obstacles.  In the end we created a portable Bluetooth wireless speaker with powerful killer audio and kickass thumping bass in a size no larger than a booklet.” said Mr Sim Wong Hoo, Creator of the Sound Blaster and CEO of Creative Technology Ltd.

“With the all-new Sound Blaster Roar 2, we have upped our game and taken the feat of speaker miniaturization to the next level.  The main design intent of the Sound Blaster Roar 2 was to create a smaller and lighter version of the Classic Sound Blaster Roar while retaining its sonic DNA.  This is even more daunting than the designing of the original Sound Blaster Roar, because by the law of physics, great audio simply requires a larger enclosure.  By further pushing the envelope of high-powered portable speaker design, we have again achieved a new ‘impossible’.

The Sound Blaster Roar 2 retains the same mind-blowing 5 drivers, the same electrical design, and the same battery as the Classic Roar, but is now 20 per cent smaller.  Not only smaller and lighter, we have made it sexier.  By revealing the pulsating machine-finished bass radiators, your music now becomes an aurally, visually and sensually appealing experience.  And by re-orienting the speaker in a vertical position, you can get a new audio profile that is louder and more directed − great for a noisy party or an outdoor environment.”

The Sound Blaster Roar 2 portable Bluetooth wireless speaker is available in Black only and is priced at INR 16,999. It will be exclusively available on Amazon India from mid-May 2016 onwards.