Lava Launches A72 And A76 4G Smartphones | TechTree.com

Lava Launches A72 And A76 4G Smartphones

The smartphone company also expects another similar smartphone in the coming weeks. 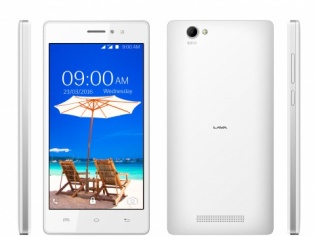 Lava International Limited; one  of the fastest growing mobile companies, today announced the launch of  two 4G smartphones - Lava A72 and A76, allowing customers to have/upgrade to 4G technology for enjoying superfast internet connectivity and faster downloads at an affordable price range.  Another 4G smartphone, in the similar category, Lava A89 is expected to be available to consumers in the coming weeks. A72, A76 and A89 are competitively priced at Rs. 6499/-, Rs. 5699/- and Rs. 5999/-respectively.

In an extremely cluttered 4G mobile handset segment in India, Lava is all set to distinguish itself with six highly reliable 4G smartphones in its portfolio now.

Lava A76 features a 4.5 inch display screen, while A72 and A89 feature 5 inch display screens for a better viewing experience - browsing through photos, watching videos or surfing the web at blazing fast 4G speeds through these phones; brings life to the content.

The smartphones are powered by a 1.5 GHz Quad Core Processor and are coupled with 1GB RAM, thus providing seamless smartphone performance and multi-tasking experience to consumers. The phones are further coupled with 8 GB ROM (expandable up to 32GB) which gives ample space for storage of applications and data to users. The 4G VoLTE variants are supported by Android 5.1 Lollipop operating system for better user experience. Additionally, A72 and A89 will get a guaranteed upgrade to the latest Android 6.0 Marshmallow operating software.

These smartphones reinforce Lava’s expertise in innovating reliable phones – all the three phones have Video PIP mode that helps to access any app while watching video, Smart Screen Gestures functionality for easy accessibility of features, Smart Music feature through which music can be played even when the screen is off, auto call recording, Flip to mute feature and LED flash on receiving calls functionality.