The doodles by Sophie Diao represent the distinct features of the earth’s major biomes. 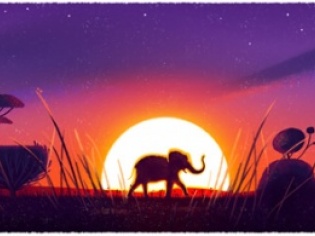 Remember learning about the tundra region, tropical rainforests in your geography classes?
In case you want refresh those memories a little, check out the Google Doodles by Sophie Diao.
The doodles capture the beauty and diversity of the earth’s five biomes. The ice-cold tundra region is depicted with a polar bear and the melting ice forms the Google logo. The picturesque temperate forest is shown with a red fox and the Google logo cleverly etched on the barks. The lush savannah grasslands feature an elephant, while the desert doodle features a tortoise and cactus. The splendor of the ocean is captured with coral reefs and an octopus that forms the Google logo.
Describing the doodles Sophie Diao said "The vastness of Earth's diversity makes it an intimidating topic, but in the end I chose to highlight Earth's five major biomes: the tundra, forest, grasslands, desert, and coral reefs. In each illustration, you'll find one animal who's been singled out for their 15 minutes of fame. Each time you visit Google.com, you'll randomly receive one of the five doodles. Keep refreshing to admire a different side of Earth's immense beauty."
The concept of Earth Day was conceived by John McConnell and was first celebrated in the year 1970. The day is universally observed to raise awareness and protect the environment.