Home » News » One Plus One Users To Receive New Android Update

One Plus One Users To Receive New Android Update | TechTree.com

One Plus One Users To Receive New Android Update

The smartphone releases its Android 6.0 Marshmallow based Cyanogen OS 13 update. 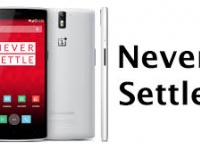 The Chinese smartphone maker One Plus has rolled out its new edition of Cyanogen OS 13 update on its first series of One Plus One phones. The company has confirmed the
release of the Cyanogen OS 13 update (ZNH0EAS26M) on their official blog.Users will receive an update notification and can download the same on their devices.
The new update will include all major Marshmallow updates.
The official blog update read “Our friends over at Cyanogen have informed us that CM 13.0 (ZNH0EAS26M) based on Marshmallow will drop starting tomorrow. The rollout
will be staged so only some of you (random) will get it at first, and as always, patience is appreciated.’’
The company plans to roll out the updates for One Plus Two devices as well.