The study conducted by researchers at University of Bergen was published in the Sleep Medicine Journal. 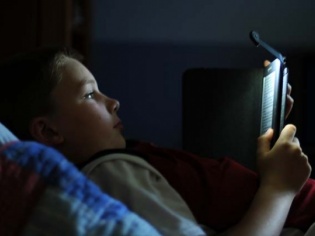 A team of sleep scientists from the University of Bergen sought out to determine the effects of reading from electronic gadgets as against reading a book before bedtime. The researchers observed that an exposure to reading from gadgets for about 30 minutes could adversely affect one’s sleep.

The objective of the study was to determine whether the background light emitted by iPads had any profound effect on the quality of sleep. The researchers compiled data to analyse the sleep patterns of those who read books as well as from those who read from electronic devices. The research involved students of the average age group of 25 years as subjects of study. The subjects had no previous history of troubled sleep. The students were allowed to stay at their respective homes and polysomnography was used to record sleep disorders.

It was noted that those who read from books had no effects on their sleep and the bluelight emitted from electronic gadgets affected the quality of sleep of those who used them to read. However, the good news is that the duration one slept and the time it took to doze off were the same in both circumstances. Light emitted from the tablet’s screen may have an effect on levels of sleepiness.

The iPad, tablet computers did affect the sleep waves generation by a gap of 30 minutes which is of significance. Over 16 non-smoking individuals were included in the study. They were approximately 22 to 33 years of age.

The subjects were used to operating tablets and had no physical or psychological problems. They were asked to sleep in their own beds and their brain wave patterns were recorded.

Even REM (Rapid Eye Movement) sleep waves were noted down. This special pattern of sleep is responsible for dreaming and clearing up the clogged up tunnels of the brain from the past detritus of memories.

The main problem with iPads was the blue light they emitted from their screens. This interfered with sleep quality, according to Reuters. Also the sleep duration was on average about eight hours which is enough of a time of shuteye for solid mental regeneration and day time freshness.

However, those who participated in the study reported feeling sleepier when they read a book than when they explored the Net on an iPad. Old school seems to work for humanity on a full-time basis.