Six new apps, including Photoshop Touch, will soon be available for Android and iOS. 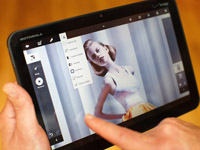 Adobe has announced its cloud-based initiative, with content creation and sharing services for tablets. As part of this initiative, Adobe will be releasing six new apps to allow users to design and edit their content.

The apps will be released for both Android tablets and iPads, with apps for the former platform set to launch as early as next month. Unfortunately for iPad users, Adobe does not appear to have a confirmed release date as of yet. This could very well be a result of the spat between these two companies. According to Adobe, an announcement on availability will be made in "early 2012".