Skype Partners With Indian Studios To Bring Bollywood Mojis To Its Messenger | TechTree.com

Has selected Yash Raj Films and ErosNow, to ensure that its localised content is a complete package. 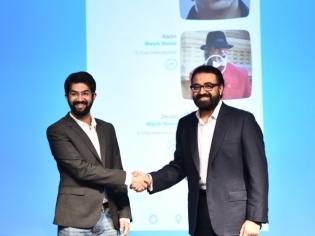 With 300 million users worldwide, and 500 million downloads across platforms, Skype does have plenty of people on board, even when compared to instant messaging behemoth’s like WhatsApp. And with such a large user base, it becomes increasingly important to cater to your users and more importantly, deliver localised content. And Skype today, has done just that for its users in India.

The VoIP company that also runs a chat messenger (from the good ol’ MSN days) is now focussed on getting more users on board its mobile chat platform. And as with every instant messaging platform out there, apart from Facebook’s Messenger, it is always a competition with WhatsApp.

In what appears to be a bid to get India’s large user base of instant messaging users on board Skype has announced a partnership with Yash Raj Films and ErosNow, to add a Bollywood touch to their Mojis feature.

Mojis are short video clips, with audio that capture famous moments, so that users can express themselves better instead of typing out a drab old text message. And Bollywood clearly does not run short of dialogues as we all know.

Partnering with Yash Raj and Eros will give Skype access to a massive data base of films and dialogues to choose from, adding some fun to the Skype messaging experience for fans.

Still then Skype has a long way to go, with WhatsApp’s every increasing user base which was recently at 900 million (monthly active users). While that is big number to catch up with, it is great to see how creative other messaging platforms are getting in a bid to play catch up.

WhatsApp is current instant messaging king in India, followed by Facebook’s Messenger and Skype as the Q3 GlobalWebIndex pointed out late last year. Things have not changed much even today and this is so because of issues related to limited data connectivity outside major metros, meaning that most of the messaging is text-heavy.

Bollywood fans living abroad need not feel left out as the new Mojis are available worldwide and across platforms in the features tab of the emoticon picker on Skype for Windows desktop, Mac, iOS, Android and Skype for Web.