Home » Mobiles » Why Microsoft Uses Liquid Cooling On The Lumia 950

Why Microsoft Uses Liquid Cooling On The Lumia 950

A smartphone that records 4K video does get hot, but not hot enough for Liquid Cooling. Microsoft debuted its newest Lumia 950 and Lumia 950 XL smartphones back at its devices even last night. And while the octa-core Qualcomm Snapdragon 810 chipset and its hexa-core powered siblings did get some attention, one hardware feature that clearly stood out from the rest of the specs was liquid cooling.

Liquid cooling is not easy to pull off and little is known about its reliability in the long run and yes, if you own a car, it is similar to how the radiator keeps things cool under the hood even in the hottest summers.

So how does liquid cooling work? And more importantly what is it doing in a smartphone?

Liquid cooling is not new, even in the world of electronics as gaming and performance systems have been using it for a while now. But clearly, they are large and take up space and that is something you do not get in a smartphone.

Fujitsu was the first company to show off a liquid cooling module for smartphones and this was not too long ago, but just back in March 2015. The company actually managed to fit in a pretty complex mechanism (with plenty of research) into a sheet-like structure that is just 0.6 mm thick (that is less than 1.0 millimeter).

How does Liquid Cooling in a smartphone work? Well, it works in a closed loop pipe where a coolant heated up by the processor below it, moves away from the heated area and cools down into the cooler areas of the phone, finally making its way back into the heated zone via the other route. 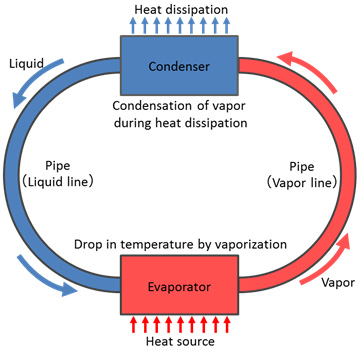 This works thanks to two processes commonly occurring in nature called evaporation and condensation. School textbooks could not have explained it better. But simply put, the coolant (liquid) turns into vapour when near the heat source at high temperatures and moves away from it down the pipes to the cooler zones (and into the condenser) to eventually turn into liquid. Fujitsu managed to even get the flow right and this is coming from a component which sits inside a device that will be placed into the oddest of positions (inside pockets, on the table) or even held upright for long, while placing calls. 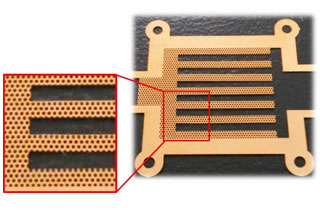 Inside the evaporator unit which sits on top of the processor, Fujitsu managed to squeeze in a sheet with an etched pattern on one end. This prevents the liquid to come into the evaporator the other way, while the super heated liquid (now vapour) heads out through the gauze (Why? Because in its current state it now can). And this processor goes on and on keeping the chipset sitting below the processor cool thanks to greater heat transfer and dissipation.

And all the above fits into a sheets of copper that is just 3 layers thick and uses no external power source to get rid of the heat generated by the chip.

Why liquid cooling in a smartphone?

Now that we know how liquid cooling works and we now know that liquid cooling is fool proof, a question comes to the mind as to why did it took so long to go commercial. More importantly, why have companies like Apple who invest so much of research into two smartphones a year have not adopted the same?

This comes down to two factors, namely optimisation and performance.

In Apple’s case, you will not need so much power, because every app and game has been optimised to run longer, cooler and smoothly on an iPhone. Software optimised for set hardware plays a big role overall smoothness and performance.

In the case of Android, it is not about optimisation, but an approach of an assembled PC. Google builds the software code, manufacturers use the necessary drivers and the software runs on various chipsets and components, but it is by no means efficient.

There’s two reasons for that. One is 4K video, and the second is Microsoft’s Continuum.

If you have not noticed lately, 4K video is picking up. While most smartphones can pull off 4K video, manufacturers do place a limit as to how much you can record. That would be 5 minutes for most and that again is for reasons related to heating up your phone and two, the limited space to store 4K video. And then comes Continuum, a feature that lets you use your Lumia 950 as a desktop PC, connected to a bridge called the Microsoft Display Dock.

While, the 950’s display is a Quad HD one, it does not take long to understand that providing processing power for all of this requires smart coding and running your smartphone at a higher clock speed to be able to keep up with both your monitor's UI and the smartphone's UI accessible at the same time. Lets also not forget that Windows 10 is rendering all those apps at a smooth 60 fps refresh rate with a supported resolution of up to 1920 x 1200 pixels. That is quite a task and this is where a capable processor with multiple cores still cannot keep up, which is where liquid cooling comes in. And that is exactly why Microsoft included liquid cooling on the Lumia 950 and 950 XL.

As for the rest of the devices, they will not need so much of processing power, which is why the need for liquid cooling on a smartphone is usually not required. Heck, what we do require is a fuel cell battery to keep up with the smartphone's growing multimedia capabilities (and there is one in the works right now).

As for the Lumia 950 and the Lumia 950 XL, think of them more as pocket PCs. With all that processing comes the heat and that is why they need it more than your smartphone does, just like a Bugatti Veyron that needs 10 radiators to keep the hyper-car cool enough to run at even normal speeds.