While this list does not make up the whole FPS category, it is just a part of a huge number of FPS games being developed for Android. 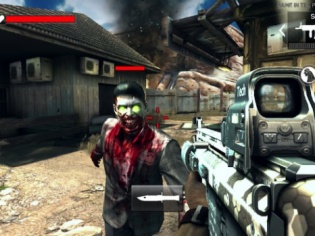 So, you love action and adventure, is it? If so, you are at the right place.

Here is a list of 5 best First Person Shooter (FPS) Games that you can play for free (at the time of this writing) on your Android smartphone.

However, you know that its pretty difficult to choose the best 5 out of a huge list of spectacular games being developed nowadays.

Yet, here is a small try of ours. Modern Combat is by far one of the best FPS series available on Google Play Store and with its fifth installment 'Blackout', Gameloft simply raises its level. With some of the best graphics, marvelous game-play and plenty of action, the campaign mode comes with an exciting story line. You can even build a squad of your own and also you can level up to five different classes. Also, this is the first of the five installments to be available for free download on Google Play Store. While this game looks good on your smartphone, we would suggest you to definitely try this on your Android TV or your gaming tablets if you have one. Yet another spectacular FPS game until date with addicting graphics and lifelike physics. As the name suggests, you have to kill zombies in this game with a bunch of powerful weapons. The best of the game is that, the develop continuously updates it which means that you get new content every now and then. You have around 10 regions to travel across in the game and you can explore 33 unique environments. Interestingly, the game also features an Arena mode where you can take part in tournaments and win real prizes. However, the game has in-app purchases. So, be careful. It looks like developers are now really trying hard to bring the experience of playing games on a console right in your Android device and it looks like Madfinger Games are really behind it to give the best gaming experience on your Android device. In Shadowgun Deadzone is pretty gun game and primarily focuses on multiplayer. You can crouch behind the walls, jump over the barriers and toss grenades while fighting off enemies in the FPS multiplayer game. A key feature in this game is that up to 12 players can play at a time connected online. The game has two modes to choose from - Deathmatch and Zone Control along with a number of maps and 10 playable characters. Again, a zombie-shooter game by the same developer Madfinger Games who developed Dead Trigger 2. While Dead Trigger 2 comes with some addicting graphics, the Unkilled is probably the best-looking zombie shooter ever made for mobile devices and thus we had to include it in our list. If you have an Nvidia Tegra X1 powered Android device, then we feel this game is a must try to simply check out the more detailed special effects and improved reflections and shadows. This game is likely to be your favourite if you are a fan of having best looking games in your collection. As others in the list, this game is also free for download onto your Android device. This is an immersive FPS game which looks to be completely science-fiction where in you have to fight for humankind's survival. In this game, you have 10 levels with multiple weapons and powers. You can run, shoot, drive vehicles and also pilot of mech. It is pretty much in itself. Along with this, the game also has 7 multiplayer modes on 7 different maps and the game size is a heavy 1.6 GB. The game also allows you to communicate in real time with your teammates through voice chat.