The handset offers the best of Sony. 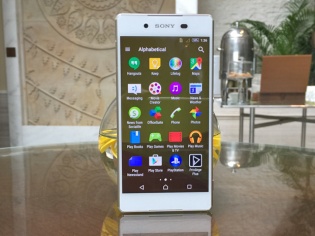 Sony's flagship launch cycle is faster than most handset manufacturers. At one point, they had a new top-end phone every six months. This time around, The company has rolled out the Xperia Z3+ in India. It definitely seems like the best smartphone from Sony's camp. But, justifying its Rs 56,000 price tag is going to be a challenge.

Design
If you have held any of the recent high-end phone from Sony, you know the Japanese brand's Omnibalance design language. The rectangular slab phone features Corning's Gorilla Glass on either sides.

While the design looks nice and clean, I think it's time for a change. Seriously, most people won't be able to differentiate the Xperia Z, Z1, Z2, Z3, and Z3+. Sony has however refined the design. This time around you have got thinner metal frame. To protect the corners from damage, Sony has added plastic bumpers that hurt the aesthetics.

Taking user feedback into consideration, the Japanese brand has let go of the shoddy plastic flaps that protect the USB port on earlier models. The phone is still waterproof though. You can submerge this phone 1.5 metre for half an hour. What's amazing is that despite all this, the phone is only 6.9 mm thick. Screen
The Z3+ sports a 5.2-inch IPS LCD. It's a Full HD display with 1920x1080 pixels. You get the pixel density of 424 ppi. Panel is good at colour reproduction. The brightness too has gone up a notch.

However, blacks continue to be Sony's weak spot. And no, I'm not comparing it OLEDs. Most IPS screens on top-end phones are much better at producing blacks.

Key Specs
The Xperia Z3+ is the first Snapdragon 810 powered phone to hit the Indian market. The 64-bit octa-core chip is clocked at 2 GHz. The phone has 3 GB RAM and 32 GB of internal memory. There's also a microSD card slot that supports up to another 128 GB.

For shutterbugs, there's a 20.7 megapixel primary camera. While selfies and video calls are taken care off by a 5 megapixel front-facer.

Software
The Z3+ runs Android Lollipop out-of-the-box. It has Xperia UI on top of it. The interface hasn't changed much from the previous iterations. The default theme looks a lot like the  PlayStation XMB dashboard.

Most Sony apps have rounded icons, while the Google app icons are mostly rectangular. This breaks the design consistency, which isn't good thing for a flagship phone.

Thanks to the powerful Snapdragon 810 chip, the phone runs smooth. We didn't get a chance to check the gaming performance though.

Sony's latest flagship packs in boasts of a 20.7 megapixel camera. It is backed by Exmor RS backside illuminated sensor. There are plenty of camera modes and AR effects. However, You will be using the Superior Auto mode most of the times. At max, Superior Auto mode can only shoot at 8 megapixel. For 20 megapixel shots, you have to select the manual mode.

From a few shots we managed to click at the venue, the low-light performance has gone a notch-up from its predecessor. Oh and it does heat-up abnormally during 4K video recording. For more details, keep an eye out for our detailed review.