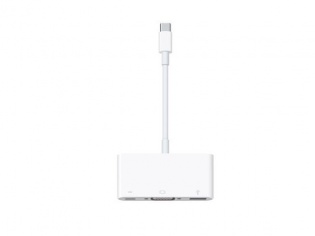 Apple unveiled the all-new MacBook to much fanfare. According to the Cupertino-based company, it reinvented notebooks in every way to deliver the thinnest and lightest MacBook ever.

There's no doubt, absolutely no doubt that the new MacBook looks classy. At 1.3 cm, it's one of the thinnest laptop in the world. Weighing-in less than a kilogramme, the MacBook is impressively light too.

In its quest for sleek body though, Apple compromised on connectivity options. The computer only comes with a 3.5 mm jack and lightning port (reversible C-type USB that's there on the latest iPhone). Wondering how to connect a pen drive or wired mouse? Well, you can't without buying Apple's Multiport Adapter.

I'm already seeing a super sleek laptop with something sticking out of it. Rather than carrying extra hardware to use something basic as a pen drive, I would prefer thicker profile.

There's more to it. This small piece of cable with trio of ports costs $79 (approx Rs 5050) in the US. I know, anyone who affords a laptop that costs around lakh rupees wouldn't mind shelling out a few more grand. The real question is whether you should pay the premium, only because you can afford it?

We all know that Apple makes quality products, but that alone cannot justify the Multiport Adapter's pricing. To put things in perspective, let's see what else can be bought for $79.

I'll skip a horde of Chinese products to avoid the quality concerns. In reputed brands, you can purchase the Moto E and Lumia 635 (4G variant of the Lumia 630) for less than 80 dollars. Heck, the Lumia 520 is even more affordable than that. And yes, I'm talking about unlocked phones (no contracts attached). But, this is a totally different product segment right? Well, that's my point! Where, Motorola (Lenovo) and Nokia (Microsoft) offer good smartphones for around $80, Apple is selling you a damn cable. 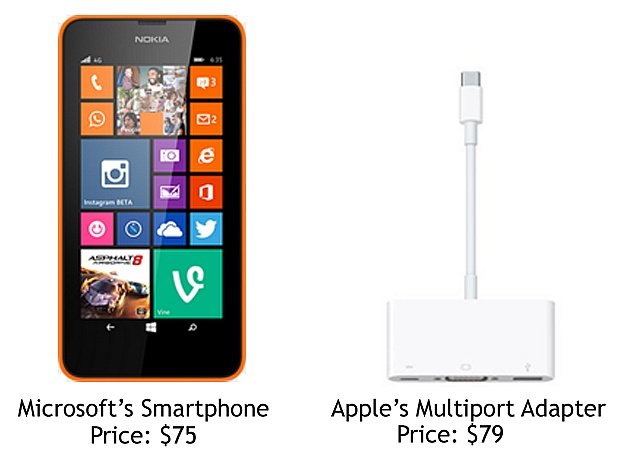 These smartphones feature IPS screen, camera, decent processor, bunch of radios for connectivity, battery, internal storage, and whatnot. Compare that to a cable with three ports! No matter how well-built it might be, there's no justification for the Multiport Adapter to cost $79.

Some people will suggest that if you don't like it, then don't buy it. However, it is not as straightforward as it sounds. More than a simple case of a brand overpricing its product, here Apple is testing the intelligence of consumers. Sony did a similar thing a few years back (remember products like Memory Stick Pro Duo?), and we all know where it lead to.