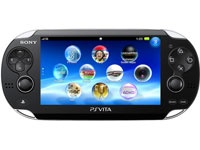 
Unit 13 is a third-person military shooter in the vein of the popular SOCOM and Syphon Filter games. Zipper Interactive has made many cult classics such as Recoil, Crimson Skies, and Mechwarrior 3, in addition to the SOCOM franchise. This is the perfect excuse to try out the Vita's splendid dual-analogue sticks. While there isn't any SixAxis support, Unit 13 bears token inclusion of the front touchscreen for basic interactions and secondary grenade and scope controls.

The narrative, or the lack of it, carries on the spartan theme with 36 missions in pursuit of a fictional terrorist outfit in a fictional Middle Eastern country. Do well enough and you get extra 10 unlockable High Value Target missions. The plain vanilla missions get added replay value with the Dynamic mode, which mixes things up with randomly generated objectives.

The missions are classified into Direct Action, Covert, Deadline, and Elite types. Direct Action is your garden variety objective-based mission. The Covert and Deadline missions terminate if you lose your cover or fail to complete the mission in time, respectively. The Elite missions are tougher with health generation disabled. While level length varies for each mission type, they are all just long enough to squeeze in 5-10 minute breaks.

Unit 13 features varied character classes such as Pointman, Gunner, Commando, Sniper, and Infiltrator - each proficient with different tactics and weapons. Sticking to one of these guys is rewarded with experience points that level them up quicker, which in turn unlocks better weapons and tactical gear.

Unfortunately, while the game is fun to play for the most part, a very limited field of vision and really pathetic sensitivity and high acceleration on the analogue sticks makes the game a nightmare to play. The retarded level of difficulty and the ridiculousness of the time-bound levels make me wonder if anyone bothered to beta test the game at all.

This and a lack of PvP multiplayer support ruin the potential of Unit 13. However, if you can find a buddy for online co-operative play, then the missions get a lot more manageable. Still, Unit 13 is an opportunity lost due to poor design decisions and lack of fine tuning.


The very tagline of the Everybody's Golf (EG) franchise is that it's "so simple even your dad can play". It indeed is, as my dad would vouch for it. Just don't let that fool you into dismissing it as a one-dimensional affair. No sir; EG packs in surprising gameplay depth despite its beginner-friendly approach. In fact, out of these three games, I ended up spending the most amount of time on this one. This is especially remarkable, as I'm someone who isn't too fond of sports simulations.

It takes absolutely no time to pick up and play the game. You get to switch between various golf clubs, set the direction and spin on the ball, adjust swing power, and then perfectly time the impact for best effect. Once you scratch past its deceptive simplicity, you realise that while having fun requires no effort, achieving that perfect shot requires a lot more. To my surprise, I found out that deeper golf terminologies and techniques actually make a difference here due to a splendid physics engine that simulates friction, gravity, wind, weather, and many other minute details.

You can get through the course alright with the basics, but knowing what run and carry mean, for example, marks the difference between accurately placing your ball in that tiny patch of fairway and angrily waving your SW 56 club in a sand trap. In fact, spending an afternoon reading golfing techniques actually made a considerable improvement to my game. Once you get better, you can even compare your scores against the global leaderboards. Unfortunately, that's all there is to the multiplayer component at the moment, which has been promised to be fixed in a future update.

Single player experience is kept fresh with unlockable players graded across parameters such as Power, Control, Impact, Spin, and Sidespin. You can either stick to one character and keep levelling it up, or just buy a better one from match winnings. The idea is to find one that suits your playing style the best, and then augment it with better gear ranging from clubs, balls, and shot gauges that modify their base attributes.

EG also implements the touch, SixAxis, and Augmented Reality (AR) aspect of the PS Vita in just the right way. The physical buttons still handle the most important aspects, but the front and rear multitouch surface can be used to interact with the menus and scenery, in addition to plotting the distance to the hole. The game allows the motion sensor and the rear camera to allow the player to survey the surroundings in the first person mode. All this may not impact the gameplay much, but it's still a great implementation of the console's new toys.

EG is both simple to pick up and yet difficult to master for those willing to expend time and energy for the perfect scores. A mix of great graphics, excellent physics, and a stellar integration of the PS Vita's multi-faceted controls makes this game an excellent choice. Don't let the game's animé silliness fool you; once you get down to it, this is as addictive as crack cocaine!


After a successful stint on the PS3 and PSP, the ModNation Racers (MNR) franchise heads over to Sony's latest puppy - the PS Vita. This game is best described as a love child of Nintendo's Mario Kart with Sony's Little Big Planet. Like the former, you can make somewhat less wacky characters zoom around tight tarmac tracks with abundance of power ups and weapons for those who like to play dirty. In addition to that, you also have the ability to customise your cart and rider to the hilt.

Like Little Big Planet, the focus is on user-generated content. The game includes an incredibly detailed map editor that not only lets you fashion your own circuits, but also modify the props and terrain with a great deal of flexibility. The way it uses the PS Vita's front and rear touch surfaces for intuitive track creation just beggars belief. Unlike the last MNR game, this one will allow cross platform sharing of user-generated content. This is a no-brainer considering the PS Vita's processing muscle. This means, you can download custom carts and tracks from the PSN whether they have been created on the PS3 or the PS Vita.

Even for those who can't be arsed into spending hours creating and modifying content, you have a fun career mode spanning 35 tracks across six tours. The controls are great, the arcade physics bang on, and the wacky combat keeps things interesting. The rich source of user-submitted mods on the PSN will keep gamers occupied long after they have conquered all the tracks. Despite the presence of the ad-hoc racing option, my only gripe with the game is its lack of an online PvP mode. This game is worth the price of admission for its track editor alone.