It features many machines including rocket launchers to fighter planes. 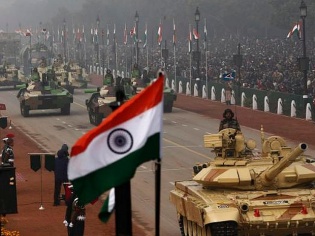 On 15th August, 1947, India attained Independence from the British Empire. Much of the credit goes to our freedom fighters. Then, there were other factors such as the World War II that caused Brits to let go of its important colony in the east. Fighting Nazi Germany significantly affected Britain's economy and military strength. The empire no longer had the might to control its colonies. Established in 1945, United Nations (UN) that replaced the League of nations did not think highly of colonialism. Plus, more than two million Indian soldiers had fought on Britain's side during the second world war. So leaving India was the least the British Raj could do to show some "benevolence".
After independence, the next big day for India was the Republic Day. On 26th January, 1950, India became a democratic government with its own constitution. To celebrate this monumental day, a parade was held at the Irwin Stadium (now known as National Stadium). For next few years, the celebrations were organised at different venues. In 1955, Rajpath was chosen and the parade location never changed after that. The parade showcases India's military might. Interestingly, the first chief guest for the parade at Rajpath was Pakistan's Governor General Malik Ghulam Muhammad. As most of our readers would already now, Barack Obama would grace this year's event. He would be the first US president to witness India's display of power. While he will get to see many war machines developed in India, Russian equipment will also be a common sight. Indian government did not showcase its intercontinental ballistic missile, capable of delivering nuclear payload, Agni-V. Still, there will be plenty to please the military tech aficionados. Let's have a quick look at that.
Sarath - Infantry Combat Vehicle BMP II
Sarath, originally manufactured by Russia, is generally known as BMP-II (Boyevaya Mashina Pekhoty). This armoured vehicle is fitted with 30 mm automatic cannon 2A42,
9M113 Konkurs, ATGM, and 7.62 mm machine gun. These machines are now built by Ordnance Factory in Medak, Telangana. India has developed over a dozen versions of MBP II that include a light tank, armoured ambulance, dozer, and UGV (unmanned ground vehicle). 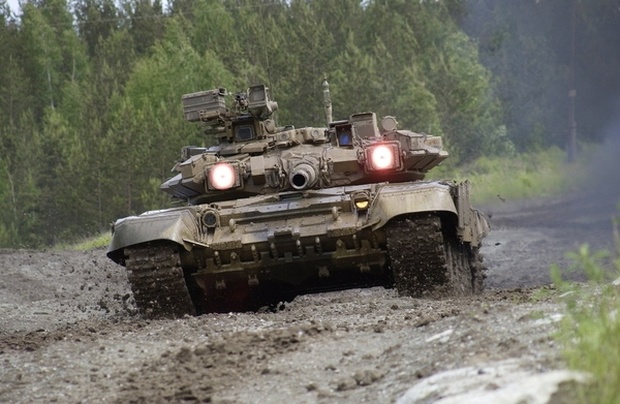 Image Source: army-technology.com
Akash Missile
Akash is India's very own SAM (surface-to-air) missile system. This medium-range system is developed by the Defence Research and Development Organisation (DRDO) and Ordnance Factories Board and Bharat Electronics (BEL) in India. Mostly attached to Ashok Leyland trucks, this battery system can take down aircrafts up to 30 km away at altitudes up to 18,000 m. It can also be used to intercept enemy missiles. Akash is in operational service with the Indian Army and the Indian Air Force. The missile has a 60 kg high-explosive, pre-fragmented warhead with a proximity fuse. This supersonic missile is propelled by Ramjet (a jet engine without rotary parts) in mid-flight. 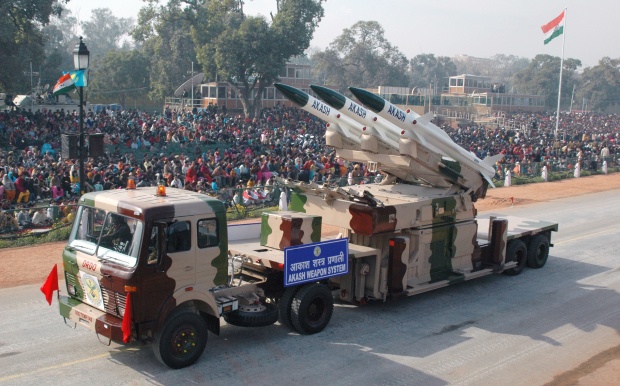 BrahMos Missile System
Result of a joint venture between Russia's NPO Mashinostroeyenia and India's Defence Research and Development Organisation (DRDO), BRAMOS is a short range cruise missile that can be launched from submarines, ships, aircraft or land. Based on the Russian cruise missile tech, this missile attains supersonic speeds with its ramjet engine. BrahMos is capable destroying targets with semi-armour piercing explosives or a nuclear warhead. One interesting bit you should know is that the name BrahMos comes from the India's river Brahmaputra and Moskva of Russia. Pinaka Multi Barrel Rocket Launcher System
To replace the BM-21 Grad launchers, India's Defence Research and Development Organisation (DRDO) designed Pinaka. The mobile rocket artillery system sits on Tatra trucks manufactured by TATA and Larsen & Toubro. The battery (heavy guns) consists of 12 barrels can fire a dozen rockets within 40 seconds. It has a range of 40 to 65 km depending on the ammunition type. The Pinaka rocket launcher system was used in the Kargil War. Sukhoi Su-30
The Sukhoi Su-30MKI is a fighter plane developed by Russia. For the Indian Air Force, it is built under licence by HAL (Hindustan Aeronautics Limited). This long-range fighter is capable of fighting in all weather conditions. It can destroy enemy positions using variety of weapons including a 30 mm GSh-30-1 gun, air-to-air missiles, air-to-surface missiles, and guided bombs. To tailor it for Indians specifications, HAL added many state-of-the-art avionics and sensors from countries such as Israel and France. This twin finned aircraft's frame is made of Titanium. The Su-30 can attain the speeds of over Mach 2.5 (approx 2100 km/h). The incredible thrust-vectoring engines enable the aircraft achieve supermaneuverability. To showcase this skill, most pilots perform Pugachev's Cobra maneuver. This is one of the most advanced military equipments in our country. Little wonder then, the Su 30 was the show stopper at Rajpath.