Home » Mobiles » Opinion: Has The Fall Of Samsung Begun In India?

Opinion: Has The Fall Of Samsung Begun In India?

Here's how the Korean-giant is losing ground in China and India. The South Korean handset manufacturer Samsung, has been a leader in the smartphone segment. With its trademark Galaxy line-up of handsets, the brand had such a clout in the market that it seemed unsurpassable. With such dominance, it reigned unchallenged till now. However, the situation has not been so sunny for the brand in the last year or so. Losing a sizable chunk of market share to home-bred Indian and Chinese manufacturers should be a cause of worry for Samsung.

With the emergence of local players offering premium features in budget segment, Samsung lost its stronghold in two major handset markets namely China and India. The situation has gotten so out of control that the South Korean handset manufacturer had to slash prices of several of its best-selling handsets including flagship devices just to stay in competition.

Overall market share in terms of shipment: November, 2013
Let us take a look at the results of a survey conducted in the month of November, 2013. Samsung was ruling the roost in India with a massive 26% of market share in terms of shipment volume. Close on its heels, was Micromax with 14% market share. It is evident from the stats that the Indian handset manufacturer was nowhere near South Korean giant, two years back. Micromax was followed by Karbonn, Spice, Maxx, Lava, Intex, and Nokia with 9%, 5%, 5%, 4%, 4% and 3% share, respectively. 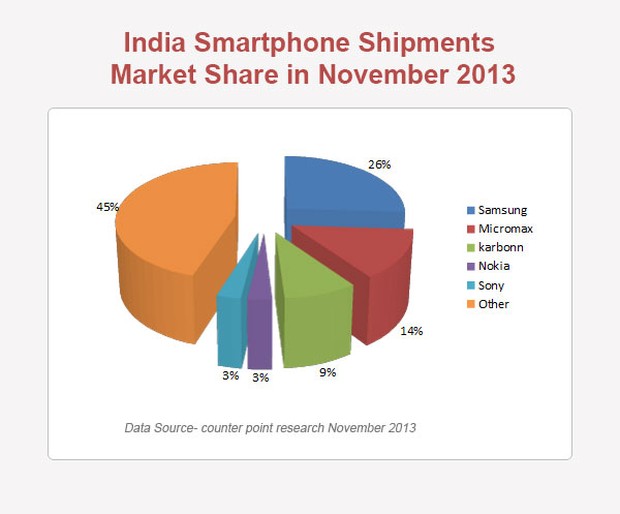 Overall market share in terms of shipment: August, 2014
Fast Forward to August 2014, Samsung was still enjoying dominance in Indian handset market with an unbeatable 25.3%. Whereas, Micromax made a significant jump to 19.1% from 14% reported in November, 2013. This was an indication of story yet to be told as Micromax continued to expand its portfolio and horizon in Indian market. Karbonn, Motorola and Nokia were lagging behind with 5.9%, 4.3% and 4% market share, respectively. Surprisingly, 41% of market share was occupied by other handset manufacturers, which included the likes of Xiaomi, Lenovo, Gionee as well as considerable number of Indian handset manufacturers. 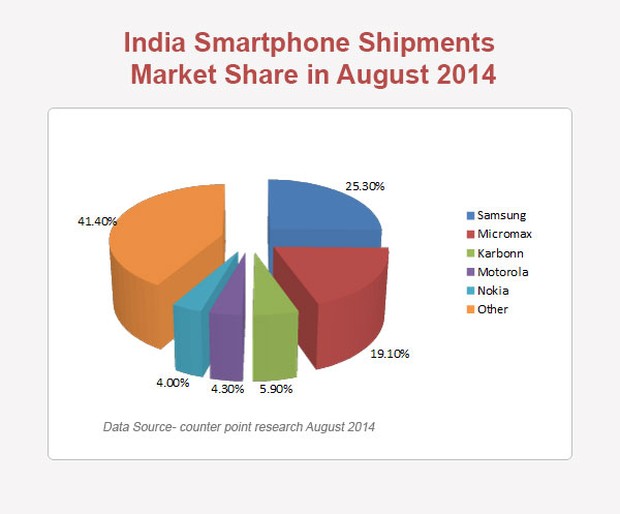 Current Scenario
Present day, Samsung is still on top of the game with 25.1% of overall market share albeit with a pinch of salt. Never has a brand come so close to dethroning the South Korean giant, until Micromax. In the month of November this year, Micromax was moving forward steadily with a market share of 20.4%. Karbonn also marked a significant improvement over its 5.9% three months ago to 9.6% in November 2014. Motorola and Sony were comfortably perched at 4.7% and 4.5%, respectively. At the same time, other handset manufacturer slumped to 35.7%. What Samsung needs to do in order to regain lost ground?
Figuratively, Samsung might still be on the top of the chart, however, as an old adage goes; “All that glitters is not gold”. The reason behind Samsung being the top player till now is the sheer number of handsets in its Galaxy series itself. Talking about figures, this year Samsung launched very few handsets (3.38%) in the Indian mobile market. However, Micromax has been constantly offering a diversity of smartphones as well as feature phones in India. Not only that the company beats every manufacturing company with 8.46% of total launches. Other Indian smartphone manufacturing companies, Xolo, Spice, Lava, Karbonn also managed to release more numbers of handsets compared to Samsung in the market this year. The cherry on the cake was the pricing of these handsets, which rarely went above the threshold of INR 20,000. Further, launches like Xiaomi MI3, Xiaomi Redmi1S, Motorola Moto G, Motorola Moto E and Android One handsets really set the bar higher with price dropping to as low as Rs 6000 for a smartphone. Samsung realised that in order to win the crowd in emerging markets like China and India, it will have to price its handsets strategically. It did just that. However, even after the price-drops, specifications of these handsets were no match to the likes of new launches mentioned above. So I think what Samsung need to do is to invest in research & development and come up with a new affordable range of products especially for the developing countries. This does not guarantee the success, but surely sounds like a viable option for the manufacturer at this point.

About Author: Sanjeev Kumar is a technology analyst and blogger. He likes talking about technology, social media, and pretty things.

Disclaimer: The views and opinions expressed in this article are those of the author and do not necessarily reflect those of TechTree.com staff.