Nolan's latest sci-fi movie is a mess covered in psuedo-intelligence. Sci-fi is the most challenging genre for film-makers. After completing Sunshine (2007), British Director, Danny Boyle stated that working on Sci Fi movies is so spiritually exhaustive that he won't revisit this genre again. He also added that "There's a reason why many directors only make one science-fiction film...". Because of this reason, I appreciate Christopher Nolan for giving this genre much love. I have truly loved his past work such as The Prestige (2006) and Batman Begins (2005). Especially in the former, he handled the human perception and deception with fine balance. I hate to say it though that his latest movie Interstellar is a big mess coated in pretentious geekyness. I know, that I have to explain a lot to support this statement. But first note that this article is full of spoilers. If you are planning to watch the movie, do that before reading this. I'm not an Astronomy expert or physicist, but thanks to the books such as Cosmos and A Brief History Of Time, I learned enough to make observations. TV channels including National Geographic and Discovery have also helped in understanding some of these concepts.

Here's the film's premise
The film's premise takes in a not-so-distant future where food and water have become scarce. Mostly, because of blight and massive dust storms. There are no armies in this dying world (strange, considering security forces will be essential when people are fighting for survival). NASA has gone underground, and is secretly working to save humanity by locating habitable planets. And all their hopes are tanked on three planets revolving a rotating Black Hole. Let's see what's wrong with that. There's No Need To Leave The Earth
NASA's plan in Interstellar does not make sense as adapting to a new planet and populating it, is gazillion times complex than solving Earth's problem. In the movie, you can see people driving cars and pick-up trucks, so we haven't run out of crude oil yet, it's just the food and water. Our planet is covered by 71 percent water. Off which, 2.5 to 3 percent is drinkable and only one percent is accessible to us. To solve the future water issue, scientists in Interstellar does not have to do anything. Because, the brightest minds of Israel have already found the solution, that is, Desalination of Sea Water. To understand this, think of your RO (Reverse Osmosis) water purifier and imagine it on a massive scale. Using this technology, Israelis get 300 million cubic meters of water every year. That's 40 percent of country's total water usage. In the next few years, it's capacity will double. So the solution is right there, but you cannot expect ignorant Americans to know what's happening outside their country. Similarly, botanists have already been fighting blight by genetically modifying the crops. So basically, there's no reason to leave Earth. Finding Habitable Zone Without Considering Goldilocks?
When it comes to finding a future home for humanity, scientists focus on star system's Goldilocks zone. It is basically a possible habitat zone in any solar system. Planets in this region can sustain liquid water, just like Earth. Had our planet been closer to Sun, it would have been scorching hot like Venus. Farther from Sun, and it would have been dry and frozen. As you read this article, NASA's Kepler space observatory launched in 2009 is searching for Goldilocks planets. If you simply want to search alien life, which could be in the form of microbes, then you need not consider the habitable zone. But since the film deals with finding a planet to support human life as we know it, Goldilocks consideration is a must. Unfortunately though, the scientists in the movie simply "argue" like kids to decide what planet to land first rather than using science. No Star, No Life
If the last omission wasn't silly enough, here's the biggest blunder in this movie. As mentioned earlier in the article, the three planets orbit around a black hole. There's something missing here, right? Yes, there's no proper star in this system. Without the Sun-like celestial body, how any of these planets is going to support Earthlings is a mystery. Film's protagonist, Cooper (Matthew McConaughey) briefly talks about a Neutron star. So will such star be enough to sustain life? Hell no! Neutron stars are formed after a giant star undergoes a gravitational collapse. They roughly have a radius of a city. I hope you know where it is heading now. To get rid of the food problem, a team of scientists and explorers have knowingly come to a planetary system with a dead star is unbelievable. The light we see on these planets is due to the Accretion disc around the black hole. Accretion discs are unstable, so betting on its light to support human life is also out of the question.

One Cannot Enter Black Hole Alive
First let us understand the black hole. What we need to know here is that it is a region in space where gravity is so strong that nothing can go out of it. Not even light. During the climax, protagonist Cooper (Matthew McConaughey) enters a black hole. This is impossible because the Accretion Disk around the black hole will fry him and his spacecraft with x-ray radiation, much before Event Horizon (that is point of no return). In case of black holes, an accretion disc is formed of matter on which its black hole is feeding on. Even if we consider that this particular Accretion disk is mind and calm, you simply cannot survive at such close vicinity. Moreover, there's no question of anything entering a black hole intact. Here's what Stephen Hawking, Theoretical Physicist, Cosmologist, (Einstein of our times) has to say about this scenario. Near a black hole, "gravitational force on our intrepid astronaut's feet would always be greater than the force on his head. This difference in the forces would stretch our astronaut out like spaghetti or tear him apart...".

These are the fundamental flaws in the movie. Plus, there are plenty of goof-ups:

When the crew first blasts off from the Earth, the craft uses three stage propulsion to gain the escape velocity (the speed that an object needs to be travelling to break free of a planet's gravitation and enter space). The craft, then, lands on a planet that has 130 percent gravity compared to Earth. Any kid will tell you that due to the extra-gravitational force, this planet's escape velocity will be higher. Strangely though, the spacecraft leaves the planet with the help of a single stage engine.

Inside the black hole, Cooper ejects and watches his spacecraft getting destroyed below him. Since even the light cannot escape the black hole, he actualy won't be able to get the visual of the spacecraft. Moreover, if light (travelling at 1,080 million km/hour) cannot act against the black hole's gravity pull, how does eject mechanism (approx 300 km/hour) work?

The Endurance craft is modelled after the space station from Stanley Kubrick's 2001: A Space Odyssey. A rotating wheel-shaped space station is ideal to simulate gravity with the help of centrifugal force. While the depiction of gravity in Kubrick's movie was perfect, it's distorted in Interstellar. When Romilly asks Cooper to disengage spinning motion to observe the black hole, Romily does not float even though the gravity simulation has been suspended.

Later in the movie, Mann (Matt Damon) tries to dock his spacecraft to Endurance without matching its spin. He fails, but surprisingly the docking mechanism remains intact. In reality, since Endurance is in circular motion, its docking parts should drill/damage Mann's spacecraft. After a few minutes, Mann's craft collides with the Endurance destroying at least one of 12 modules of the spacecraft. After such damage, the Endurance continues to roll in the same plane, which is not possible. 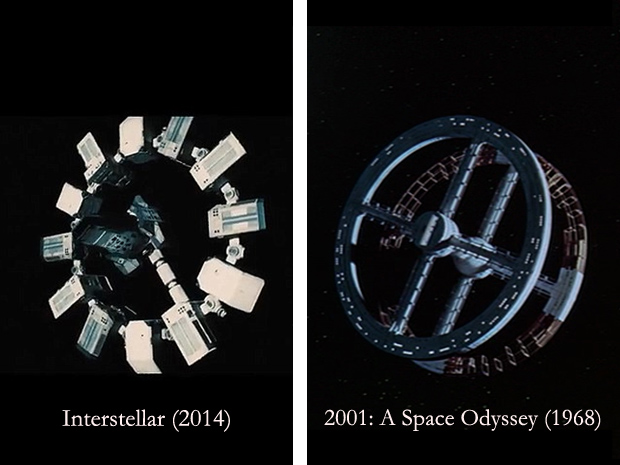 In the climax, when Cooper is trying to change the past by hinting his daughter to make him stop from going to NASA's mission. Why does he give the co-ordinates to NASA in the first place?

In addition to this, there are other problems such as bad dialogues. Most characters converse in monosyllabic fashion. Especially, blurting our so called profound one liners. Take for instance, 1. "Mankind was born on Earth. It was never meant to die here.". 2. "This world's a treasure, but it's been telling us to leave for a while now.". Besides that, humour is laboured. If you like British humour, you can categorise Nolan's humour as German. The best thing about the movie is Matthew McConaughey's brilliant performance. Other actors including Michael Caine are totally wasted though. It's good to have emotional flavour in the movie, but in Interstellar it's dragged. Compared to what Spielberg has achieved in A.I. (2001), Nolan's characters are shallow. Apart from the breathtaking depiction of a wormhole, the special effects are not so "special". Neill Blomkamp delivered stronger visuals with a limited budget of 30 million dollars compared to Interstellar's 160 million dollar splurge. Don't even think of comparing it to the camera wizardry and special effects of Alfonso Cuarón's Gravity (2013).

So not only from the science perspective, but also as an art form, Interstellar disappoints.