The Moto X (first gen) has been one unique Android device. Unlike most droids, it focuses on the user experience than the maddening specifications. With a 4.7-inch screen, it was a handy phone fit for single-handed usage. For 2014, Motorola has rolled-out the Moto X's successor, which is also called the Moto X. According to the company, the new phone is bigger, faster, and packs in more megapixels.

The Package
The Moto X (2nd Gen) ships with all the essential accessories, which it should considering the Rs 32,000 price tag. The wall charger is cleverly designed. It has two USB slots, so it can charge two phones simultaneously. Same can't be said about the earphones though. Although they sport a fancy design that's inspired by Apple's earpods, Motorola's earphones are very uneasy to wear. Even the sound is trash, but lets save that bit for the review. Part from this, the box contains a bunch of leaflets and a SIM eject tool. The device we received has an eco-friendly wood back. It generates polarised views in terms of aesthetics, but it definitely feels unique to hold. Even the texture is pronounced. For sturdiness, Motorola has gone with a metal frame that holds the wooden back and plastic fascia in place.

Apart from the bigger size, the two front-facing grilles separate the new Moto X from its predecessor. However, only the lower grille houses a speaker. The front is dominated a 5.2-inch Full HD (1080p) screen. With pixel density of 424 ppi, the screen is very sharp. However, if you're coming from a 720p (HD) display, you won't notice much difference. Since it's an AMOLED screen, the colour reproduction is brilliant. The reds, greens, and blues look vibrant. Moreover, the blacks looks accurate. While the screen has got better in terms of specifications, it loses out on usability due to the bigger size. If you liked the first Moto X for its compactness, then the new Moto X is not for you. You simply cannot operate it with one hand. We will discuss it in greater detain in the upcoming review. Software
The new Moto X ships with Android 4.4.4 KitKat. Since Motorola has stopped customising Android after its disastrous MotoBlur UI, the launcher on Moto X looks very similar to what you get on the Nexus devices. Needless to say, it's an ideal choice for the Android purists. The interface is cleaner than what you get on most Android phones from other manufacturers such as LG and Samsung. Another advantage is that the Moto X (2nd gen) will be one of the first few handsets to receive Android Lollypop update. 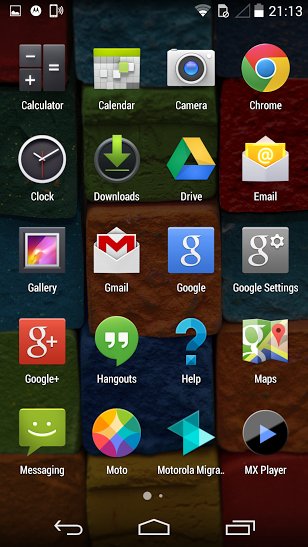 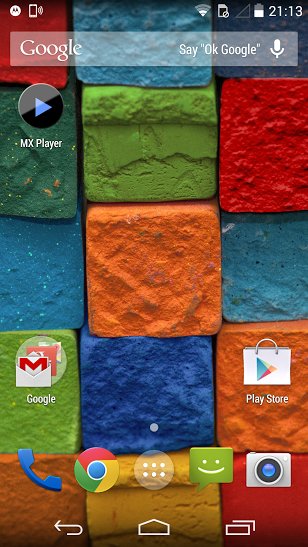 The user experience is good. During my few hours of usage, the handset did not show any sign of sluggishness. How it behaves after loading-up a lot of apps remains to be seen. Those who believe in numbers, can find the synthetic benchmark scores below. In the meantime, I'm thinking of putting this phone to a "termite test".