We go hands-on with Microsoft's latest flagship handset in India. For over a year, Nokia (Microsoft) has been focusing mostly on the entry-level market. The company launched the 520, 630, 525 in quick succession. On the other hand, there was not much activity in the top-end segment. India hasn't seen any flagship launch post Lumia 1520, which is too big to be a phone anyway. The Lumia 930 took almost six-month to reach the Indian shores.

Design And Build
Nokia is known for its design and material expertise, and the Lumia 930 get it right on the both fronts. The materials used in construction are top-notch. The 930 is the second Lumia to feature an alumimium-frame. Its front is covered by a slightly curved Gorilla Glass. Apart from adding up to the aesthetics, the curved glass makes swiping gestures more natural. The back is made of polycarbonate that helps with the grip. Like most high-end devices, the battery is not user-replaceable. These days, most companies are busy building anorexic phones. We already have phones with just 5.5 mm thickness. However, Nokia doesn't seem to be following this trend, at least for its flagship phones. Remember, the Lumia 800, 920, 1020? Although not that clunky, the Lumia 930 is definitely not slim at 9.8 mm (almost 1 cm). One of the reasons behind the not-so-slim body is the integrated wireless (induction) charging tech. Tipping the scales at 167 grams, it's on the heavier side.

Nokia has retained the capacitive navigation keys below the display. Similar to the iPhone 5s, this phone uses nano-SIM card. There's no denying that the Lumia 930 is a stylish handset. However, we can't call it the best looking Windows Phone since HTC One (M8) for Windows beats it to that.

Screen
The Lumia 930 sports a 5-inch Full HD screen. With pixel-density of approx 441 ppi, the screen is impressively sharp. Since it's an AMOLED panel, you get vibrant colours and deep blacks. To enhance the outdoor legibility, Nokia has also made use of its ClearBlack technology, which includes the use of polarisation filter to reduce the glare.

Specifications
The Lumia 930 is powered by a quad-core Snapdragon 800 chipset clocked at 2.2 GHz. It has 2 GB RAM and 32 GB internal storage. There's no microSD card slot. Nokia has fitted a 20 megapixel camera with Optical Image Stabilization (OIS) to produce relatively sharper images. The optics come from the renowned German company Zeiss (earlier known as Carl Zeiss). The 930 has a dual-LED flash that also works as a video light. it can record 1080p video at 30 fps with rich sound achieved with four microphone setup. For Skyping, you get a 1.2 megapixel HD front-facing camera. Other key specifications include Wi-Fi , Bluetooth 4.0, GPS, and NFC. It packs in 2420 mAh battery that adheres to Qi-standards. If in case you're puzzled by induction charging, refer to the image below. Software
The Lumia 930 comes with Windows Phone 8.1 version Lumia Cyan. Since the phone was announced way earlier than the 830 and 730, it doesn't run the latest Denim update out-of-the-box. it wouldn't be too long before, Microsoft will roll-out the FOTA (Firmware Over The Air).

As most of our readers would already know, Cyan brings a flexible Start Screen to the table. Users can now set custom background that slides below the transparent tiles. It also features an Android-like notification bar, which is labelled as Action Centre by Microsoft.

On the quad-core Snapdragon 800 chip, Microsoft's mobile platform offers fluid user experience. During an hour we got to spend this phone, it didn't show any sign of stutter or lag. Android may have more features, but WP beat Google's platform when it comes to interface and stability. 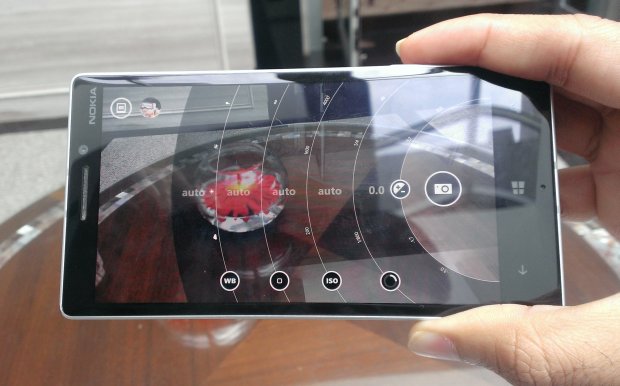 The Lumia 930 comes with the usual goodies that are associated with Nokia's smartphones. It includes free voice-guided sat nav license, Nokia Mix Radio, Office Suite, and loads of camera enhancements.

Overall, the 930 is a promising Windows Phone handset. However, Microsoft should have launched this phone at least a couple of months ago. To make the matters worse, the 930 won't show-up in the stores till 15 of this month. In a market where companies such as Sony, launch a new flagship every six months, such lazy approach is going to hurt Microsoft and its newly acquired phone division Nokia.