A few Apple Watch features are surprising and downright creepy. At the special Spring Forward (2015) event, Apple mostly focused on its smartwatch. The Apple Watch was unveiled at last year's keynote. Today, the company shed light on the nitty-gritties. Similar to most smartwatches, it lets you make/receive calls, push notifications, and read messages and emails. It doubles up as a fitness band, and also packs in apps such as Maps, Weather, and Photo gallery are pre-loaded on this gadget. With the Apple Watch on wrist, you can take Siri wherever you go. However, what most people don't know is that some of the Apple Watch's features are somewhat weird. Here's a quick list: Heartbeat
Before you remotely 'touch' someone, you might want to impress that person. In this case, Apple has got you covered. The Apple Watch lets you record and share your heartbeat to the special one. To do that, you have to press and hold two fingers on the screen and the built-in heart rate does the rest. Apple claims that it is "a simple and intimate way to tell someone how you feel". For best results, send a cheesy Bollywood inspired poem along with the heartbeat. 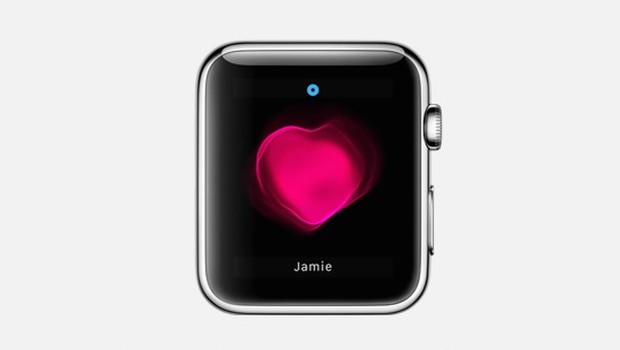 Sketch
As its name suggests, Sketch lets you doodle on Apple's smartwatch. For aesthetic appeal, Apple adds a glow effect to these doodles. There's more to it though. You can share this screen with friends. The person on the other end, can reply to your sketch with their creative doodle. You may also write a short personal message. It's very similar to what Nintendo DS offered a decade ago. However, back in 2004, gamers could only communicate over LAN. Useful or not, I am anticipating a lot of sketches human reproductive organs making their way to Tumblr. Walkie-Talkie
This one is self explanatory. Apple is bringing the fun of two-way radios to its smartwatch. To enable the Walkie-Talkie feature, the Watch has built-in mic and speaker. At this point, we are assuming that Apple might be using Wi-Fi to transmit the data. However, we can't rule out the possibility of Apple actually packing in conventional radios in its gadget. One thing is for sure that this feature is going to be fun.