In past, HTC had come up with humongous phones such as the HTC One Max. However, the Desire 816 is the company's first mid-range "phablet". The phone offers everything that today's Android fans ask for — huge screen, quad-core processor, and dual-SIM connectivity. However, with a price tag of Rs 26,000, it competes with the likes of the heavy-weights such as the GALAXY S4, Nexus 5, and Lumia 925.

Design and Build
The Desire 816 looks like an overgrown HTC One. It is so big that you can only reach around 60 percent of the screen area with single handed use. The highlight of the phone are its front-facing twin speakers. Being a mid-range device, it trades the One's aluminium with plastic. Plus, don't expect the details to be as fine as seen on HTC's flagship device. Although it doesn't feature a unibody (seamless design), the back-panel cannot be removed. This means that the battery isn't user replaceable. The matte plastic used on the front and the sides is top-notch. However, same can't be said about the glossy plastic on its back. Not only is it slippery, but also gets scratched easily. The review unit we've received has already lost colour at a couple of spots. On the right hand side, there are two Nano-SIM slots accompanied by a microSD card slot. Yes, it's probably the only dual-SIM phone to feature support nano-SIM, which is generally seen in flagship phones such as the iPhone 5s and Lumia 930. The Lock button and Volume Rocker are placed on the left hand side. That may not be the ideal place for the Lock key, but it's better than putting it on the top, where it's difficult to reach. Display
The Desire 816 features a 5.5" HD Super LCD2 screen. Although people expect Full HD screens these days, the Desire 816's HD panel is sharp enough to please you. It's bright and colour reproduction is also quite good. What's sorely missing is the Gorilla Glass protection, which can be found in affordable phones such as the Lumia 630.

Key Specifications
The device is powered by a Qualcomm Snapdragon 400 chipset clocked at 1.6 GHz. It has 1.5 GB of RAM, and there's Adreno 305 GPU to handle games. Other features include a 13 megapixel camera, 5 megapixel front-facing one for selfies, 8 GB internal storage, microSD card slot, and 2600 mAh battery.

Software
The Desire 816 ships with Android 4.4.2 Kitkat. Like any recent HTC phone, the 816 comes with the Sense UI. Aesthetically, it is undoubtedly best Android customisation in the market. The icons look flat and simple. More importantly, the animations are minimalistic. The BlinkFeed is a noticeable feature, which brings all the latest updates from the world of technology, sports, and even your social networking account in neatly stacked tiles. Along with the fancy looks, the SenseUI shines in terms of performance. HTC has optimised the software so well that you could hardly see any slow-down under normal use. For more details, keep an eye out for our in-depth review. Those interested in synthetic benchmarks, can check out the scores below: 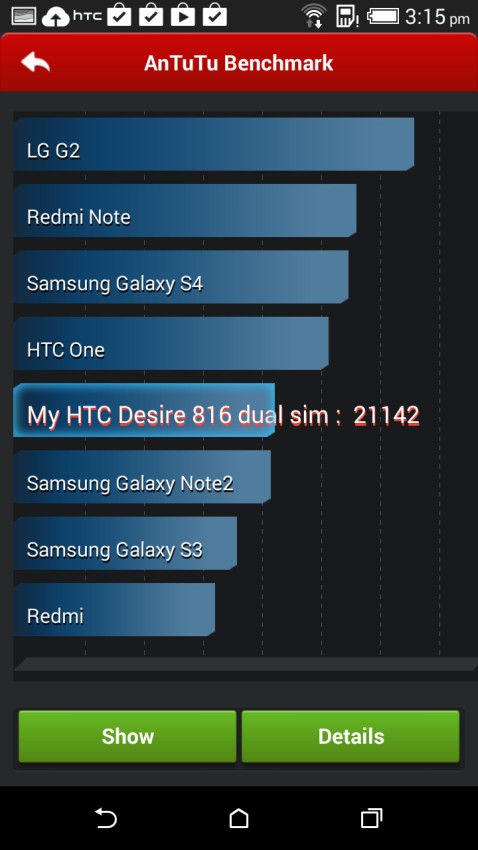