Find out which handset better suits your needs. 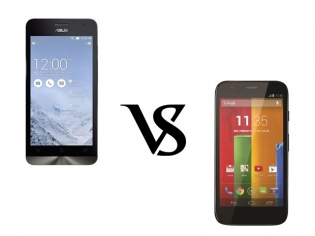 Considering the high-end segment is mostly dominated by Samsung and Apple, the Finnish brand Nokia (now owned by Microsoft) turned its attention to the budget smartphone market. Similar strategy worked wonders for Motorola, and now the latest company to follow the suite is Asus. By pricing its feature-packed ZenFone 5 aggressively, the Taiwanese company is planning to take on the Moto G. Let's find out how they stack up against each other.

Construction And Aesthetic
As far as the sturdiness is concerned, both the Moto G and ZenFone 5 offer excellent quality for the price. These phones can easily withstand a few (accidental) drops. The materials used in construction are also top-notch. In terms of looks, the stylish ZenFone 5 fares better than Motorola's clunky phone. As mentioned in its review, Asus has "borrowed" the design elements from HTC's premium handset, One, but we are not complaining since it looks nice. Display
The ZenFone 5 as its name suggests sports a 5-inch screen, while the Moto G settles for a 4.5-incher. Both these panels are IPS type so the colour reproduction and viewing angles are good. These screens are covered by Corning's Gorilla Glass 3. Since the Moto G packs in HD resolution in a relatively smaller size, you get higher pixel density. It's 325 ppi Vs. ZenFone 5's 294 ppi to be precise. However, it doesn't make much of a difference. So I think it's a tie in the screen department.

Software
Moto G supports the latest Android 4.4 Kitkat, which is a great thing at this price tag. The stock Android interface looks much better than what Samsung, Sony, LG, Lenovo, and Gionee offer. On the other hand, Asus offers highly-modified ZenUI. Thankfully, it looks and performs very well. Plus, it's more consistent and cohesive compared to Google's design language. However, as far as the version number is concerned, Asus lags behind Moto with Android 4.3 Jelly Bean. Coming to the subject of future updates, Moto G has a clear advantage. It's eligible for Android L, while the ZenFone 5 hasn't even got Kitkat yet. Firepower
The Moto G is powered by Qualcomm’s Snapdragon 400 chipset. Based on ARM's tried-and-tested Cortex A7 architecture, the SoC (System on Chip) is clocked at 1.2 GHz. Then, there's 1 GB RAM and Adreno 305 GPU to handle gaming. On the other hand, the ZenFone 5 is based on Intel's Atom platform. This particular handset runs a Dual-Core Atom Z2560 chipset clocked at 1.6 GHz. It features 2 GB RAM and PowerVR SGX544MP2 GPU. That's more than enough to handle all the popular Android games including Real Racing 3. In terms of performance, Asus' device is as good as the Moto G.

Camera
The ZenFone 5 sports an 8 megapixel camera. It comes with PixelMaster enhancement, which let's you snap decent photographs in low-light conditions. In well-lit environments, the ZenFone 5 produces quality images. Compared to it, Moto G's 5 megapixel camera module disappoints with its performance. Forget night-mode, even in normal conditions, Motorola's handset produces grainy pictures. So if you're into photography, ZenFone 5 is a much better option than the Moto G.

Miscellaneous Features
Contrary to Motorola, the Taiwanese brand Asus duly covers all the essential accessories such as a wall charger, USB cable, and decent earphones. Another area where Asus takes the lead is the expandable storage. It supports up to 64 GB microSD card slot. On the other hand, you're stuck with limited space to store your music and movies on the Moto G.

Price
The Moto G (16 GB) costs Rs 14,000. There's no point in buying an 8 GB version, as the Moto G lacks a microSD card slot. In comparison, priced at Rs 10,000 (8 GB + microSD slot), the ZenFone makes the Moto G look overpriced. For us price conscious Indians, that makes a lot of difference. So the aggressive pricing clearly puts the Asus' product ahead of the Moto G.